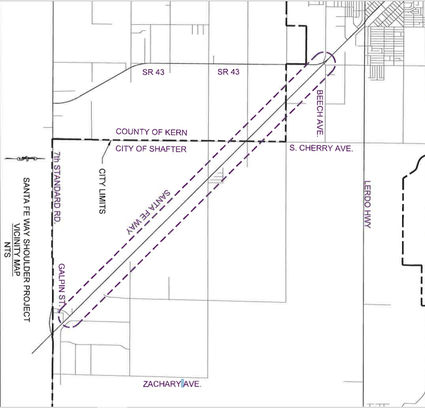 The stretch of road at Santa Fe Highway and Los Angeles Avenue is set to be surveyed for preparation of shoulder work to be completed.

Highway 43 between Los Angeles and Galpin streets may be expanding after the City Council approved a survey.

Shoulder work will be done along this route, increasing the safety of the roadway.

The work has been discussed for months, with studies being done to compare the feasibility of the project to the needs of the project.

The city has turned to companies to complete the survey in a timely manner so they will be able to use the funds available.

In 2019, Shafter received $1.5 million from the Federal Transportation Improvement Program Program for the city to construct paved roadway shoulders at Santa Fe Way between Los Angeles Avenue and Galpin Street. This construction funding is in the FTIP for the fiscal year 2021-22.

In preparation for this project, the city released a request for proposals to seven qualified firms to complete the topographic survey.

An appropriate budget to cover their proposed cost and potential contingencies is $30,000.

An alternative was presented to the council which had the city using city staff and resources to complete the field survey. Committing existing city staff to complete the survey would result in delaying other projects. They also note that the construction should be in a position to build as soon as the next fiscal year commences to ensure that the biddable construction plans be completed within the next six months. The survey work is a prerequisite to a finished design and it should be completed as soon as possible.

In other council action, the City Council approved an easement for Pacific Gas & Electric at the location of the Shafter Learning Center parking lot.

The city is partnering with GAF to construct improvements at the Shafter Learning Center that includes additional outdoor space and classrooms. Construction of these additions requires that Pacific Gas & Electric relocate an existing electrical service to avoid conflicting with new structures.

Pacific Gas & Electric also determined that a portion of the electrical service to be retained for the benefit of the adjacent County of Kern Fire Station requires an easement. There is no fiscal impact for this easement, with no budget action required. This was approved by the council.