This virus is no joking matter 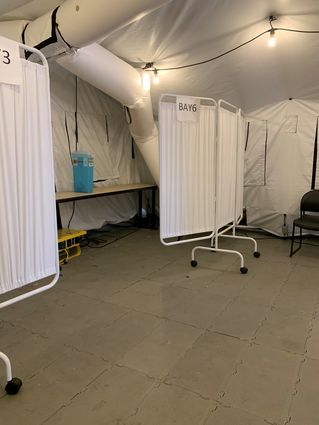 Inside the COVID-19-designated white tent at Adventist Hospital on Chester Avenue.

Covid-19 isn't something to take lightly. From personal experience, it can be terrifying when you continue having new and different symptoms on a daily basis.

I am one of the lucky ones who did not experience a high fever to give me an idea I had it. The fever is what let me know I still had the virus; however, what I got was a horrible headache before I knew I had been exposed and infected. Regular Tylenol wasn't doing the job.

One can go through the list of covid-19 symptoms and checkmark most of them, low temp (yep), cough (yep), tired/weak (double yep) and congestion (yep) and high temperature (nope). My daily bedtime soon became anytime between 7 and 8 p.m. Staying in bed for 17 days straight from Christmas through New Year's is not any way to spend the holidays.

Since I never ran a high fever, I really didn't think I had the virus. It wasn't until I was informed that I had been exposed to it that I realized I was fooling myself. My dry cough was minimal and I could still smell and taste food. Not everyone gets the same symptoms. There was one day when I tried to eat something that I felt like I was eating a piece of paper.

One day of not tasting isn't bad when you consider it lasted for 17 days. It wasn't until the 10th day into this illness that I began having trouble breathing. There is so much congestion, being out of breath just walking from my apartment to my car was a long, exhausting journey.

I ended up going to the hospital Jan. 7 due to difficulty breathing. I was worried I had pneumonia on top of the virus, but luckily I did not. After an EKG, chest x-ray and vitals taken, I was prescribed a decongestant.

The hospital setup for covid patients is unlike anything I have ever experienced. At Adventist on Chester Avenue, there stands a huge white tent in the parking lot. This is where all covid patients go. Each person is greeted at the emergency room door by a nurse who asks what you are there for. When I said I had covid, I was immediately whisked across the street to the tent. The inside of the tent is divided into different numbered sections, depending on where you are in line for the triage nurse to gather information.

There was only one complication while I was home sick and away from family and that was attempting to have food delivered to my apartment. My daughter called the Wasco Walmart to see if they delivered groceries as this has been a recent Walmart advertising campaign and all a customer had to do is register, pay a monthly fee and your groceries will be delivered to you free of charge (not quite so free). It took over two hours for someone to answer the phone at Walmart and they told my daughter that the Wasco Walmart does not deliver.

This evening, I'm looking on Facebook and the first thing in my feed is an advertisement for Walmart for free shipping with no order limitations.

I looked online at which Walmart delivered and found nothing. I did find that I could leave my home and drive to Bakersfield and pick up groceries at the Walmart on Brimhall. But I couldn't really do that because I still had covid.

"I contacted Amazon and requested grocery delivery to Wasco, and they said they don't deliver to Wasco," daughter Libby Supan said.

Something is wrong with this picture.

I am fortunate that I have friends here in Wasco that I could call. Jill Drescher dropped off some groceries that I needed. I also contacted Saeed at Fiesta Latina Market on 7th Street. My daughter paid for delivery of some additional items for me. In addition, Mayor Alex Garcia hand delivered some other supplies I had run out of.

For a while the quickest thing I could fix was a peanut butter and jelly sandwich, which I ate more days than not. That is all I had the energy to make at that time.

My daughter went on the City of Wasco website and personally emailed the mayor and City Council member Vince Martinez. Both who immediately responded to her and offered their help.

Martinez said that he had talked to the city about grocery delivery when the virus first started.

"Orange Heart and I were looking into setting something up, and the city told us at the time that the county was working on a plan, so we dropped the idea," Martinez said. "But apparently the county either canceled or never implemented the plan, which baffles me."

Martinez added that "We want people to quarantine but we don't give them the resources they need to do so."

After 17 days, I'm back at work and still very tired with a slight cough and some congestion. I'm proud to say the only medication I took for the symptoms were a couple of Tylenol for the headache.

I am in the process of contacting the store manager at Walmart so we can discuss how a situation like this can be avoided in the future.

I also contacted Supervisor David Couch's office to see how the county can remedy a situation like this.

I'm one of the lucky ones who had proactive friends and family members to make sure I was taken care of every day.

Having covid is not fun. In fact, at times it is very scary. I'm waiting for the next shoe to drop in case I get any new symptoms that I keep hearing crop up.

This is a heartfelt thank you to all those who kept in touch with me throughout my illness and helped me by dropping off food and supplies and provided emotional support.

Saeed Saleh from Fiesta Latina Market personally dropped off food when I first became sick. My long-time friend Jill Drescher also brought over much-needed soup and bananas that became a craving. Mayor Alex Garcia responded to my daughter's email and brought over food that evening and council member Vince Martinez took time out to respond to my daughter and assure her that he would do everything necessary to help me while I was sick. Each one of you has my undying devotion.

Fourth District Supervisor David Couch is having members of his staff look into the lack of grocery delivery in Wasco for housebound/ill residents.

Instead of tapering off, thecovid-19 numbers continue to rise in Wasco and on Tuesday, Jan. 12, there were 4,143 cases in town with 1,027 recovered. The numbers reveal that 605 are presumed recovered in a population of 27,552. This means that 15% of Wasco residents have covid-19.

The Kern County Public Health Department continues to encourage the wearing of masks every time you venture outside and to continue to maintain a safe distance from the person next to you.