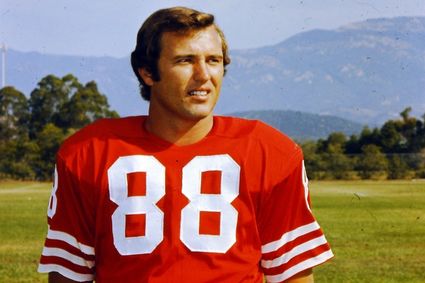 Dick Witcher was the epitome of a small town boy who went on to big things.

The city has lost one of its icons with the passing of Dick Witcher.

Witcher was a three-sport athlete at Shafter High before focusing on football at Bakersfield College, eventually being drafted by the San Francisco Forty-Niners. Witcher would go on to help San Francisco make the playoffs and had a couple of game-winning plays that highlighted his eight-year career with the team.

Dick was one of many Witchers to walk the halls of Shafter High between 1956 and 1978, more than two dozen in all, according to former Shafter High Athletic Director Doug Thompson, a nephew of Witcher's.

Witcher played football, swimming, and for the Generals. He wasn't a highly recruited player out of high school, even having trouble making the travel squad for the Renegades his freshman year. According to former Bakersfield College football coach Claude Gilbert, "If anybody would have told me that this skinny kid from Shafter would have made the travel squad, I'd have been surprised."

Witcher did make the squad and later caught the attention of some major colleges. Witcher continued his football career and studies at UCLA and helped the Bruins make it to the Rose Bowl in 1966, pulling off an upset of the heavily favored Michigan State Spartans.

Later that year, Witcher was drafted by San Francisco in the eighth round, starting a career that lasted eight seasons. During his stint in the Bay Area, Witcher had a key touchdown in the 49ers' victory over the Minnesota Vikings, giving them a slot in the NFC Championship game against the Dallas Cowboys.

After retiring from professional football, Witcher held a few corporate jobs before settling in Phoenix, Arizona, where he ran a YMCA facility. Witcher then retired to Northern California where he reconnected with an old friend, Rick Swan, a former Generals teammate from Shafter High, where they would spend afternoons playing golf, another passion for Witcher.

Even with all of the fame and success, Thompson said that he will always be Uncle Dick to him.

"I remember we would go hunting, or just play catch at the high school," he said.

Thompson said one main reason Witcher was so successful was the work ethic that a small town boy grows up with, working in the potato sheds and cotton gins, giving them a grounded perspective on work and success. Thompson recalled many times that Witcher would take him to the high school and he would throw him tons of passes, but not perfect throws. He would have him throw them behind his back, or over his head, or way low, getting him practice in catching balls in every position.

Witcher was humble and took his success in stride. Thompson even remembered a time in 1966, just after being drafted by the 49ers, that Witcher called him up and asked if he knew what kind of ball that they use in the NFL. Thompson looked it up and told him that it was a Wilson. The "Duke." So, when Witcher came to town, he picked up Thompson and went to the high school where they threw passes with the Duke.

Witcher was elected into the Bob Elias Hall of Fame in 1971. He is also a member of the Shafter High School Sports Hall of Fame. 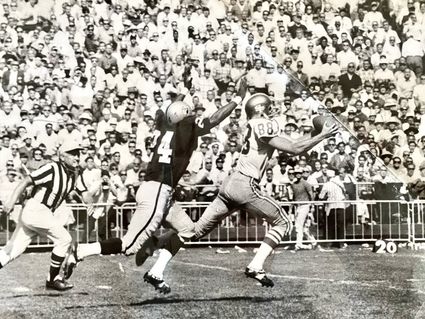 "He was a hard worker who led by example and a teammate who put team above self," said Fortenberry.

He also said that he never stopped striving to be better, which was evidenced by his continual improvement at every level of competition.

"His work ethic and willingness to do whatever was best for his teams was highly respected and appreciated. He was a receiver who also blocked and he proved his work early on in the NFL as a member of special teams. Dick Witcher was a General, and always will be, a great friend, teammate, family man and a credit to our community," Fortenberry said.