By Coach Chad Martinez
Special to the Wasco Tribune

Jacob Ruiz runs in for a touchdown, but the play is sent back due to a Wasco penalty. 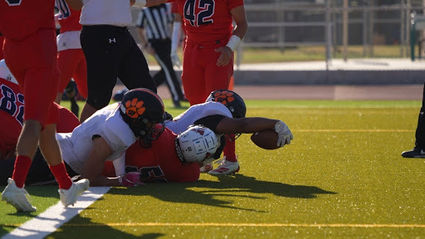 Misyn Lane holds out his arm after rushing in for a successful 2-point conversion.

"We played well all game," Coach Chad Martinez said. "We limited them to 51 yards in the 1st half. The second half we played well but we gave up a touchdown in the last second."

"Throughout the game we played well on defense and had them on the ropes," Martinez concluded.