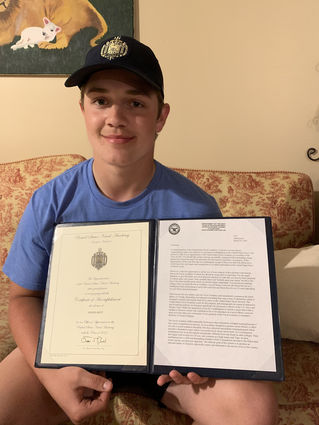 Jensen Boyt shows his certification of acceptance to the Naval Academy.

Jensen Boyt, a Shafter High senior, will be attending the Naval Academy in Annapolis, Maryland.

It has been over a little over 20 years since a Shafter High School student had been nominated to one of the nation's military academies. The last student was Eli Espericueta, who graduated from West Point in 2000.

Boyt was originally nominated by Congressman TJ Cox and went through the process of applying to local congressmen, interviews and applications. He received the call from Congressman David Valadao with the news that he had been accepted.

"I have wanted to be in the Navy since grade school," said Boyt. He will be attending the Naval Academy and will then serve at least a five-year commitment with the Navy. Currently, Boyt said that his dream is to become a Navy SEAL.

Considered one of the most challenging programs in the nation, Boyt said that he realizes what challenges he is facing and is looking forward to meeting them.

"Becoming a SEAL is such an honor and something that I have dreamed about for a long time," said Boyt.

His parents, David Boyt, assistant principal at Shafter High, and mother Kimberly Boyt have been very supportive of Jensen's goals.

"Of course, my mom is nervous about it, but they both are really proud," Jensen Boyt said. 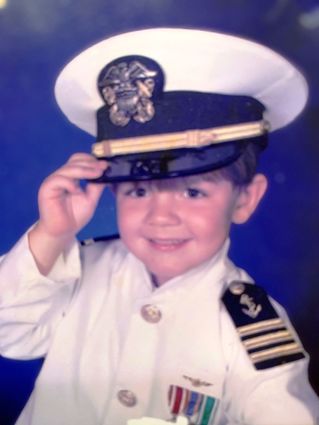 Jensen was 3 at the time of this photo. Kimberly Boyt, Jensen's mother, said that it was taken at his preschool, and he chose this uniform specifically.

Kimberly Boyt said that she is concerned for her son, but is also excited about him achieving goals that he has been shooting for.

"He was telling me about some of the training exercises that they have to go through," said Kimberly Boyt, who said that Jensen shrugged off the possible dangers and told her that he would be fine.

Boyt will visit the campus in Annapolis later this month then he will begin his Plebe Summer in July.

The Plebe Summer is a required session for all incoming freshmen in which they will spend seven weeks getting an orientation on military life, procedures and processes. They also go through several physical exams, classes, physical training as well as firearms training. When the plebes first arrive, the parents are given a tour and presentation, showing them what their child's upcoming military life will entail.