Shopping was aplenty at pop-up event 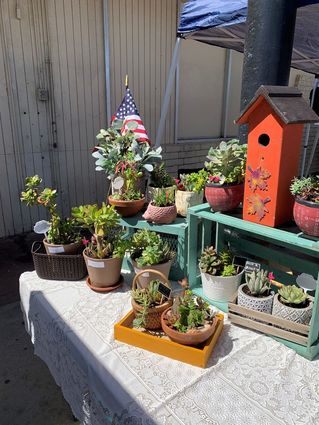 Jazmine Lucero was one of the vendors. Lucero was selling small bags that included a variety of necessities such as hand sanitizer, bottle openers, lip balm holders and a Kubaton. A Kubaton is a small metal instrument that can break a vehicle window in case of emergency. Also included in the bag was pepper spray.

"I've been doing this for about a year," Lucero said of her business.

Grannie's Garden is owned by Mary Ellen Macias. The booth was filled with small pots of succulents that are good to grow during a drought, which the state is facing this summer.

"I've been growing plants for years and it's been my hobby." Macias said. "I love playing with plants."

Lisa Macias, daughter to Mary Ellen Macias from Grannie's Garden, has been selling Scentsy for over two years.

In addition to candles, Scentsy has a new product that has a cloth flower with a long wick-like string that is placed in a jar of liquid scent and wafts through the air as an air freshener.

Some of the scented candles offered by Scentsy include new releases such as Coastal Sunset, Magnolia Linen and Vanilla Waves.

Vendor Jeff Hurley had a display of metal works that had been formed into different shapes. He had metal flags and thinly machined spheres with an object inside.

"I just purchased a CNC Plasma machine that enables me to work in the shaping of metal into finer pieces, which cost $180,000," Hurley said. "These weekend pop ups allow me to pay the machine off a bit sooner." 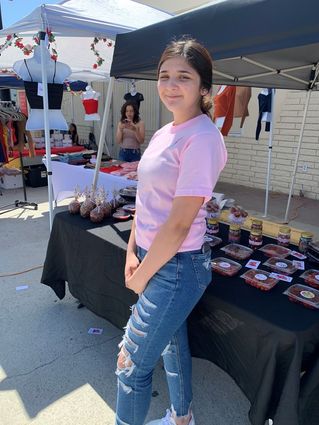 Desiree Duenas, of Candybydes, had sweet, sour and fire candy snacks to sell.

Hurley is a union pipefitter in his day-to-day job.

"Because of covid-19, I had to come up with another source of income," he said.

Candelaria Castillo and Jessica Castillo both manned the booth Sweets by Candy.

"Our most-popular item is our Churro Cheesecake," Candelaria Castillo said. "I spent the last week baking."

A large selection of baked items was available. Their preferred method of social networking is through Instagram. This was Candelaria's first time at an event such as this pop-up and she said that she enjoyed it a lot.