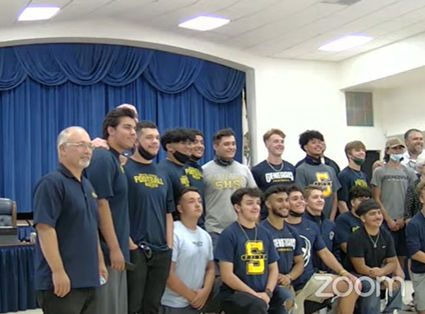 Mayor Cathy Prout presented a proclamation to the members of the undefeated team who sported a 5-0 record this season. Led by Coach Jerald Pierucci, the team outscored its opponents 233-29 and outgained its opponents by a five to one margin.

"This team showed a unity and love for one another and represented the city of Shafter with class," said Prout.

Pierucci thanked the city for its "amazing support" and his team for their performance on and off the field.

"These guys loved representing the city of Shafter and proudly worked for the name on the front of their jerseys," said Pierucci.

The council also received the results of a survey that was conducted by a group of California State University, Bakersfield students on the city. The team surveyed residents and asked them a series of questions that covered the quality of life in Shafter, the confidence they have of the city's leadership, as well as what the most important needs are of the city.

The overall strength of the city, according to the survey, was the performance of the city's police department and fire services. The survey showed that over 80% of those surveyed were extremely satisfied with the law enforcement presence.

The responders thought that the area needing most improvement was the employment opportunities and the housing industry. Those responding showed that only 58% were satisfied with the employment outlook in the city, and 62% showed confidence in housing developments in Shafter.

The downtown area was the biggest area that responders thought needed improvement.

"This is in part to the changing way people receive their news, with a lot more of this generation not reading the newspaper, and gravitating more to social media, such as Facebook, Instagram, and other media platforms," Acosta said.

She said that the survey indicated that more emphasis should be put on social media for reaching residents.

Overall, the responders showed a great quality of life in Shafter, other than retirees. There was a low score on the confidence the responders had when it came to opportunities for people retiring in the city.

In next week's Shafter Press, we will be reporting on a proposed budget for the 2021-22 fiscal year which will be presented to the council for review. This proposed budget will be discussed by the City Council at its meeting on June 1.