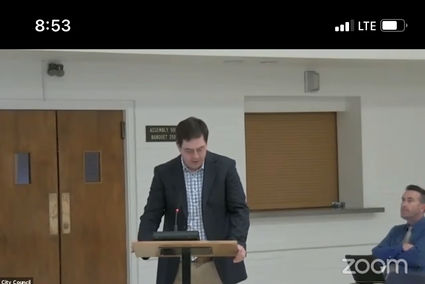 David Franz gives a report on the status of the Shafter Branch Library.

The City Council voted Tuesday to disband the Shafter Branch of the Kern County Library from the county structure, creating a municipal library run by the city in partnership with Bakersfield College, after the county ended talks to reopen the library.

In April, an ad hoc committee was created, consisting of Mayor Pro-Tem Chad Givens and council member Gilbert Alvarado, to explore options to keep the Shafter Library open past the current agreement with the Kern County Library system, which expires July 1.

The Kern County Library system closed its doors on any further talks of keeping the Shafter Branch open.

"It is really disappointing to see that the county has put Shafter as the lowest priority when it comes to its library," said Givens. "We are lowest on their list, but in reports we are third highest when it comes to foot traffic in the county."

There were three options for the council to consider.

According to the ad hoc committee, the first option would keep the 12 hour a week service in the county system, but the price would go up, resulting in a cost of approximately $290,000 for the next five years. The county would keep the library open, but the city would have to pay the county for their services.

The second option was to pay the county to keep the library open with a 40 hour week service offered. This cost would be approximately $930,000 for the five year agreement. With agreements made with the San Joaquin Library Association, for a library to use the Library Operating system programs, a Kern County employee has to be on site to run the software. This accounts for the majority of the cost that would be paid by the city.

Bakersfield College, with its willingness to help the city keep its library functioning, are prepared to staff the library 40 hours a week with the cost of having the library open for the next five years at a total cost of $315,000.

"The drastically reduced cost compared to the county option is because of the generous offer from Bakersfield College to partner with the city on the project," said David Franz.

The third option was approved, allowing the city to begin official proceedings to break ties with the county.

"It is exciting. It is really disappointing to see how the county has chose not to consider keeping Shafter open, but this new venture is going to be a great one for the city and the community," said Mayor Cathy Prout.