Wasco High celebrates the Class of 2021 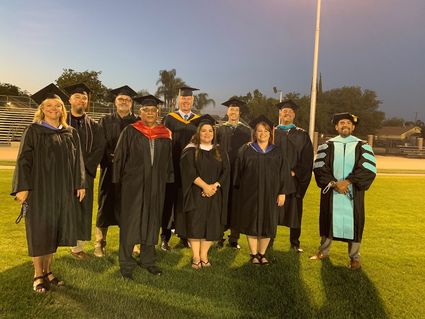 There were nearly 300 graduates at the Wasco High School graduation ceremony on Friday, marking the end of their academic careers in Wasco.

Student greetings and messages of thanks were relayed through speakers to the attendees at the beginning of the ceremony and the graduation officially began with the singing of the National Anthem by Polly Hughes, Dessie Claffy and Stephanie Wymer.

Valedictorian Rafael Viscarra told the graduates to congratulate themselves and said that graduation is the culmination of strength.

During his speech entitled "All different, yet all part one," Wonderful Academy Valedictorian Luis Luna shared with attendees that he lives with autism spectrum disorder. Not only did Luna graduate from WHS, he also received his Associate of Science degree because of his participation in the Wonderful Agriculture Career Program.

When Luna began his speech, he asked each attendee for a moment of silence to honor all those who died from the pandemic. He expressed his appreciation to everyone who helped him along the way.

"It's been difficult during the pandemic," Luna said. "We need to persevere and stride forward."

Luna shared that some of his symptoms include fidgeting a lot, moving body parts around and movements that he isn't even aware of. He even mentioned that when he was originally diagnosed, his family was advised that he might never speak. Luna's mother was confident that he would talk and fought hard to help him achieve that.

Being on the autism spectrum can often be different for everyone; but one common characteristic is living with challenges with social skills, repetitive behaviors and communication.

As Luna graduates, he is headed to the University of California, Davis where he plans to study biology.

Luna said that he has never given up and has always chosen to focus on the positive.

"I don't really see it as a disability," he said. "I see it as a special trait" by noting he has been able to maintain a 4.38 GPA.

He said that he wants to become a biologist and study viruses within the body. 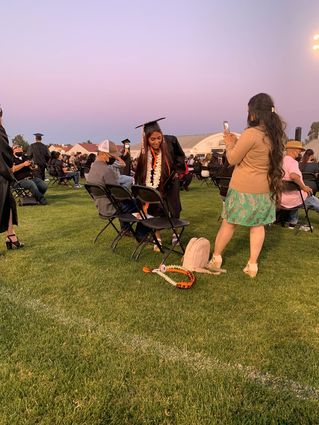 A graduate gets her picture taken by a friend.

"I always wanted to become a scientist. I believe everyone deserves to live a happy, healthy life," he said.

Wonderful Academy College Prep Salutatorian Manuel Dominguez thanked everyone for helping him along the way.

"Studying at home was hard," he said. "We were in high school, but we really weren't."

Dominguez said he missed being on campus, missed feeling awkward when walking toward an unknown person and he missed the football games.

He also asked everyone to forget about living in the past.

"Go have fun," he said. "I wish everyone a long and happy life."

As the ceremony closed, attendees were asked to sing the Alma Mater, a tradition that has been sung following each graduation ceremony.