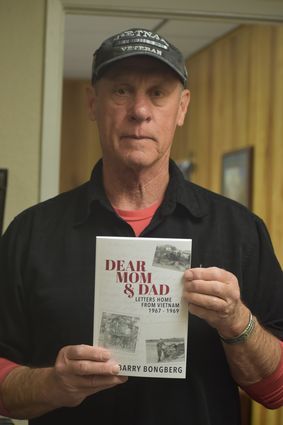 Local author Barry Bongberg will be at the Kern County Museum on Saturday, July 10.

Shafter native Barry Bongberg will be appearing at the Kern County Museum on Saturday, July 10 for a book signing and presentation involving several military themed authors and subjects.

Bongberg will join several other local military authors and speakers, including Dr. Craig Luther, from Tehachapi. Luther is the organizer of the event.

Some of the topics for the event are the eastern front and Normandy campaign in World War II, the dropping of the atomic bombs on Japan, the Israeli Air Force and wars in the Middle East, and the Vietnam War.

Among the featured speakers is Diana Carlson, a nurse who served during the Vietnam War. Carlson also is the founder of the Women's Vietnam War Memorial. Carlson will be speaking about her time in Vietnam and what it was like to be a woman serving in time of battle.

Another main presentation is the D-Day Invasion of Normandy, 77 years later. This will delve into the battle between both sides of the war.

There will also be food available courtesy of Carlos Sierra of Homies Tacos, which will be there from 11 a.m. to 2 p.m.

Bongberg said that he just got done with a second printing of his book, which is available on Amazon, as well as directly from him or at the different events that he attends.

"I really like to hear the different comments from people who have read the book. The war touched so many lives, soldiers as well as their families, and sometimes it is hard to talk about it. This book has given a lot of soldiers and their families that tool that can start to heal," Bongberg said. 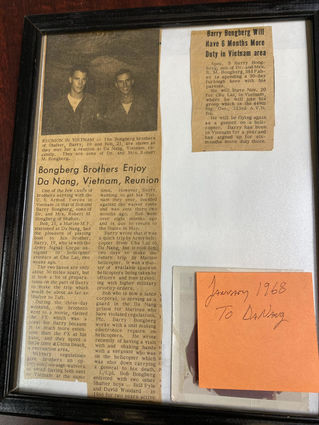 An article from The Shafter Press about Bongberg and his brother, who both served in Vietnam.

Bongberg's book was the result of a find that he made while cleaning out his parents' house. Bongberg, with his daughter Erica, found a box of letters that he had written to his parents while he was serving in Vietnam. Erica, who passed away from cancer before the book became published, was the inspiration for the book and the proceeds that Bongberg makes from the book goes to a breast cancer research organization.

"I do this for her, and the many people who are touched by this disease and help them in the fight for a cure," he said.

Bongberg said that writing the book helped him deal with a lot of feelings that he had deep inside for so long.

"We weren't welcomed home with tickertape parades, like the other wars we have been involved in. I didn't even want to tell people I was a veteran of Vietnam, and wouldn't speak about it as much as possible," said Bongberg. "But, this book has helped me deal with a lot of those feelings and has been such a source of peace for me."