Shafter shot putter ranked number one in the world 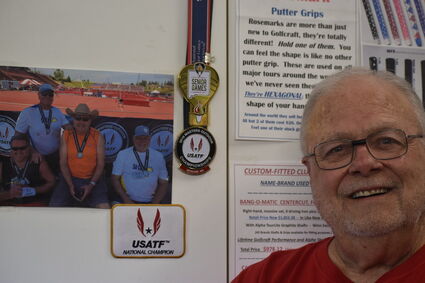 Hurlbert, right, with his Southern California teammates, who are recordholders in their respective age divisions. Hurlbert is the #1 ranked shot putter in the world in the 80-year-old division.

Ken Hurlbert, of Shafter, is now ranked number one in the world in his age division in the shot put.

Hurlbert, after a 15-month hiatus because of the covid-19 closures of track meet events, competed in a World Masters event in Santa Clara - the Striders Masters Meet - and launched a throw of 10.86 meters, which is the top throw in the world this year.

Hurlbert was pleasantly surprised with the result, especially after the long time off.

"After 15 months off, I wasn't expecting a result like that. But, I am excited with the throw and the number one ranking," he said.

Hurlbert started throwing back in high school. At a little under 5 feet in height entering high school, he went out for the football team. After one practice, the coach gently told him that he really couldn't feel safe placing him on the team, fearing the outcome if he were to get hit by the much bigger kids on the team. The coach offered Hurlbert the position of manager, which Hurlbert thought would be cool.

Not knowing that the position was pretty much a water boy, Hurlbert filled the role and enjoyed it. When track season began, the coach said that he probably wasn't a big runner, so he steered him toward the throwing events.

Hurlbert excelled in the shot put, consistently placing toward the top of the standings in the various meets. He continued to compete at the University of the Redlands, where he was the second best on the team, right behind a record holder in the event.

An old friend came to his door and handed him a shot put. Hurlbert decided to try picking up the event again and was successful right away. Hurlbert won almost all of the events he entered, including national events.

Hurlbert has won numerous national titles, as well as several regional titles. His latest meet, the Striders Master of Champions meet in Santa Clara, was the first time he had thrown in competition in 15 months.

His heave of 10.86 meters is the top throw in the world, ahead of Heikki Yli of Finland, who is second with a throw that was three centimeters behind Hurlbert.

The next big meet is set for Aames, Iowa, but Hurlbert does not think that he will be able to make it to the event.

"This gets really expensive and Iowa may not be in the cards for me this year," said Hurlbert.

Hurlbert enjoys throwing the shot put, along with his passion for golf, which he has turned into a very successful business.

Hurlbert is owner and operator of Golfcraft Custom Clubs, a business that he started over a decade ago in Bakersfield. Hurlbert trained with the top club fitter in the world, stationed in New Jersey. Hurlbert came back home from New Jersey with the knowledge and experience to begin his own business.

Hurlbert had a storefront in the Westchester area of Bakersfield until moving to Shafter five years ago.

"It is not real crazy, just enough work to keep me busy and engaged, which suits me just fine," he said.

Hurlbert said he gets joy from taking a golfer who is struggling with his game, stuck in a rut trying to better his score, and design a custom set of clubs that will change the golfer's game drastically.