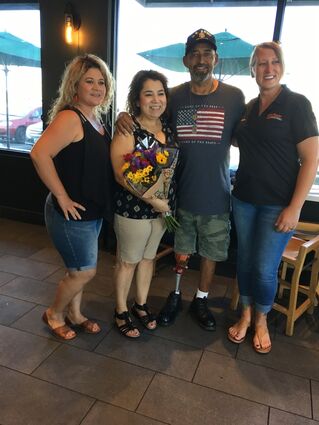 Danny had recently been sick and hospitalized.

Danny was born in Wasco and attended city schools. His wife, Petra, also attended local schools and the two were passionate about the community. Danny would go on to be a bus driver for the school district. Danny also volunteered at the Knights of Columbus, Elks, and was on the advisory committee of the Wasco State Prison Board.

Madrano said he will remember the joy Danny brought to VFW activities and events.

Danny was a longtime board member for the WUESD and Superintendent Kelly Richers said that he has known Danny for 28 years.

"I cannot remember when we met first, but he has been supportive of the district ever since I knew him," Richers said. "He truly epitomized service to the community. Danny was a board member for at least 10 years."

City Council member Tilo Cortez said there is so much to say about Danny that there is no way he could express how much he meant to Wasco.

Cortez said he was known as "Danny, the bus driver," which he enjoyed doing for many years. He said Danny was the catalyst for many community development events that are held in Wasco such as the pancake breakfasts, feeding the homeless, car shows and fundraising for Ronald McDonald House.

"Danny will be missed but his legacy will live on," Cortez said. "Simply said, Danny didn't wait for 'someone to do something,' he was the man 'doing.' He not only gave to his country, he gave equally to Wasco."

"Wasco lost one of its greatest leaders," Council member Vince Martinez said. "For years, Danny was a voice of reason in our city. I not only lost a mentor but a friend."

Orange Heart Foundation member Orquidea Ocampo said she got to know Danny through all the community events they organized.

"Danny will be an example of what a selfless true leader is," Ocampo said. "He loved giving back to the community and other communities, too."

Both Danny and Petra Rueda were immensely pleased at the Grand Marshal honor in 2019 and it gave the community a good idea just who these two were and how active they have always been in the community.

"We were originally called by Orquidea Ocampo to talk about the festival," Petra said. "I thought we were going to discuss the car show that the VFW puts on during the event; however, when we got to Starbucks, we were shocked when a group of people shouted out 'SURPRISE!' and Chair of the Festival Committee Kayla Castillo announced why we were really meeting at Starbucks that afternoon."

The Ruedas were also a host family for the Wasco Reserve baseball team. Danny was known for offering the VFW hall to any player that didn't have a host family.

Former coach of the Wasco Reserve Bill Moore has special memories of Danny from his first year coaching the Reserve in 2019.

"It was a huge effort to find housing for the players that first year in Wasco," Moore said. "He opened up the Veterans Hall and let about eight or nine players bunk in the hall. He ordered the team members to clean it up every night."

"One of our boys, player Alex Hernandez, gave me his signed bat when he left to return to Arizona," Petra said. "I was so moved, I still get a lump in my throat when I talk about it."

"They say friends become family. No truer words when it came to Danny Rueda," said Ybarra-Hernandez. "My husband and I were blessed to meet Danny on a trip to Wasco to watch our son play baseball with the Reserve."

"He gave all he had within himself that a person with a giving heart made of gold could," said Ybarra-Hernandez. "We were very fortunate to know and have Danny Rueda a part of our lives, he will truly be missed."

Former Wasco Tribune Editor Jamie Stewart was covering a flag retiring ceremony, which was one of his first stories for the Tribune. 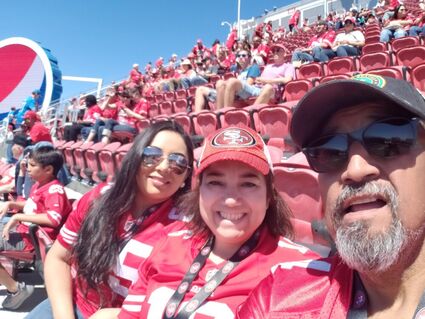 The Rueda family cheers on their 49ers.

"You could see the respect and love and reverence in his face as he looked at the flag being put on the fire," Stewart said. "That was Danny for me, a great man who was respectful, giving and always had a smile on his face, even if he wasn't feeling well."

Richard Reding, who first knew Danny as a student, said that one of Danny's favorite treats was his wife Sarah's corn sticks. Reding said if he or Sarah wanted to find out anything that was going on, they would call Danny. He knew everything in town.

"I always joked with Danny that he was related to just about everyone in town," Reding said.

Danny leaves behind two children, Jose Rueda, 29, of Florida, and Victoria Rueda, 24, along with a grandson Jaxson Rueda.