Wasco High FFA show off their animals at county fair 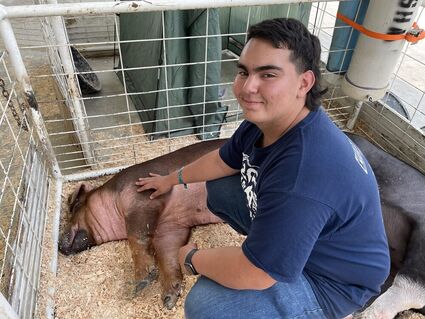 The Wasco High FFA students had a packed month after the annual Charles Craig Classic Sept. 10-12 and then the Kern County Fair.

At the annual Charles Craig Classic, the students who raised animals were able to get specific points from judges on how to improve their chances of placing at the Kern County Fair.

The Kern County Fair officially opened on Wednesday, Sept. 22. Wasco High School FFA students were near the back of the livestock areas.

Judging at the fair occurred Saturday and Sunday. One day the animals were judged based on their weight and girth as well as their posture. Most of the animals had to hold their heads up. In addition, the animals had to form a square with their hoofs while standing still.

Most of the handlers confessed that their animal was very stubborn at the beginning.

"Getting the goats and sheep to form a square with their legs as they are standing is something that needs to start at the very beginning of training," student Layla Duran said. "If you don't train your animal on the table to stand still in a square formation, it becomes hard to have them place their hoofs correctly."

Duran also said that her lamb, Oliver, took Third Place at Market at the fair. The judging is based on the moving parts of the animal such as the body and muscle.

"Oliver wasn't easy," Duran said. "He likes to pull me around."

Duran also said that the two are totally bonded now and he pays attention to her. Oliver was judged on his natural breed.

Duran, like many others, said that she likes the memories made with other members of her FFA chapter. "It's very comforting," she added.

2022 Rose Queen Ixchel Sanchez has raised goats all four years while at WHS. Since she lives on a farm, her animals are raised at her home.

She said that it has been difficult at times putting all her time into raising the animals. However, she does make some time for herself by crafting (creating things) and she also runs cross country.

Sanchez raised two goats this year, one female, Macchiato, and one male, Habanero.

"I have a lot of fun because I go to the farm and play with the goats," Villanueva said.

Villanueva said that her favorite part of the fair is the team bonding that takes place.

"On Saturday, all the students with goats went out and had dinner together," Villanueva said. She added that Oliver took 4th place in showmanship at the fair.

Junior Issac Ruddell, Jr. has raised swine for three years and plans on continuing next year. His pig's name is Chloe.

Ruddell took a different approach to bonding with his animal. He started to touch Chloe only after she had been on the farm for a week. He wanted her to get used to being on the farm and his presence. 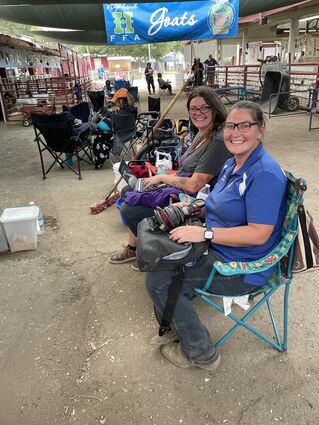 Ruddell said that while a student pays for all the food for their FFA animal, students hope to make it back when their animal is auctioned off by getting a good price for when the auction takes place Oct. 2 at the fairgrounds.

"Chloe was very stubborn for the first two weeks I had her," Ruddell said. "After a week of not touching her, I began trying to train her for two weeks and then gave her a week off." He said that once she had the time off between training, she became easier to work with.

The swine handlers use a whip to assist in training their animal.

"We gently tap them on the backs of their legs whichever direction we want them to go," he said.

Ruddell also added that that Chloe was Champion of Gilt Breeding at the Charles Craig Classic.

"I want to go to Reedley Community College," Ruddell said. "They have a good ag program."