By Lamont Gridiron
For the Wasco Tribune and The Shafter Press 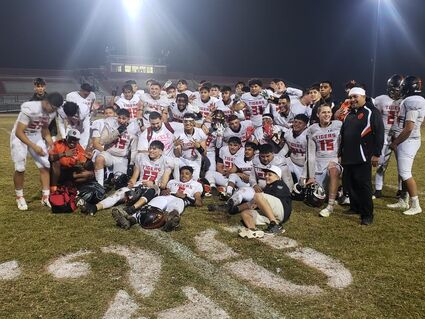 The Wasco Tigers celebrate after defeating the Shafter Generals on Friday.

Led by Coach Chad Martinez, a courageous coaching staff, and a Wing T running game, solid defensive strategies, and a host on seniors, the Tigers accomplished that feat in a win over the (5-5, 4-2) Shafter Generals, 46-20.

"The game plan was to start fast and beat them up running the ball," Martinez said. "It feels real good to be undefeated league champs."

Leading 32-12 at halftime, the Generals had every anticipation to reduce the 20-point deficit.

At 42 seconds into the second half, Shafter running back Elijha Lucero ran the ball in for a 52-yard touchdown

Wasco, who has been known to have fluent offense that moves the chains all season in every series of downs, for the first time all season, the Tigers punted in their first two consecutive possessions of the second.

As the Generals continued advance the ball in Wasco territory all the way to the Tiger 30 yard line, the Tiger defense found a new surge of momentum that allowed Izaiah Juarez to force and recover a Shafter fumble.

"We know our assignments when we're on the field," Juarez said.

After the fumble, the Generals were deflated and did not get any closer the remainder of the game.

"Our team is focused on both sides of the ball. We want to execute," Juarez said.

Throughout the third quarter, despite the Tiger defense forcing fumbles and forcing Shafter to turn the ball over on downs, the Wasco offense couldn't get the ball into the endzone or in field goal range.

Though, the momentum was brewing once again on Wasco's offensive side.

With the ball on the General 48 yard line at the start of the fourth quarter, senior running back Omar Tovar, who has been on the Wasco football injury list in recent weeks, ran the ball 48 yards untouched, to seal the Tiger victory and second SSL league championship since 2012.

"The run was amazing," Tovar said. "It was the best feeling I could ask for. Undefeated champs. A great way to go out as a senior."

Tovar, in his final regular season game as a Tiger, ran for a total of 93 yards.

Moments later, Tiger Alexis Girarte put the game further out of reach with another rushing touchdown with 1:53 left that gave the Tigers a 46-20 lead.

"Great teams win," said Sean Sharpe, who scored on a touchdown run in the first half. "We came in this week knowing we had to step it. We proved it."

The Tigers led 32-12 scoring on almost every possession, according to Wasco QB Jacob Ruiz, who had two rushing touchdowns in the first half.

"The offense feeds off the defense. They get the stops. We get the touchdowns,"

Azaiah Fegruson said, who also chipped in with a touchdown run in the first half.

"We worked really hard to win this title," said Mike Dominguez, who ran timely runs for first downs and to keep the game clock running. "Big shot out the offensive line. We would not have been able to advance the ball."

The Tigers will face the Centennial Golden Hawks in a first round playoff matchup Friday at 7 p.m. at Centennial High in Bakersfield.