1 dies after head-on collision with semi-truck 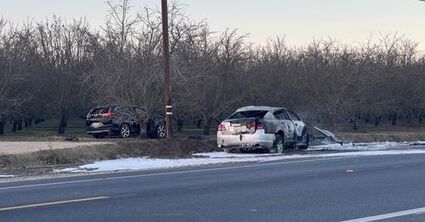 The driver of the Lexus died at the scene.

One person died Wednesday morning after a head-on collision on Highway 46, the California Highway Patrol reported.

Officers responded to a crash Wednesday morning at approximately 6:15 a.m.

According to CHP officials, a vehicle collided head-on with a semi-truck on Highway 46, just east of Wasco, prompting the closure of Highway 46 east of Root Avenue.

Officials said a Lexus was traveling east at a high rate of speed when the driver tried to pass in the westbound lane, colliding head-on with a semi-truck carrying hay.

The semi-truck then struck two other vehicles spilling a load of hay in the roadway, officials said.

After being hit, the Lexus caught fire and the driver of the vehicle died at the scene. It is not known whether the driver died on impact or from the vehicle fire, officials reported. The driver had not been identified as of press time.

It is unknown whether alcohol and drugs were a factor in the crash, officials said. No other people were injured during the crash.

Westbound and eastbound lanes were closed east of Root Avenue on Highway 46. Highway 46 was closed in both directions for several hours for the investigation.