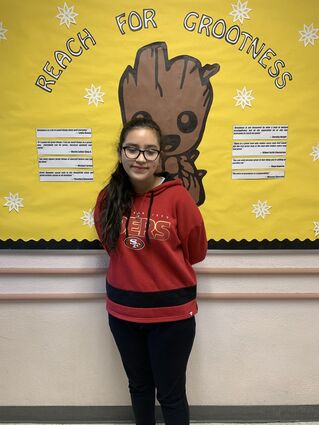 Thomas Jefferson Middle School selects six students each month to represent the school as Cougars of the Month. They are selected based on their grades, behavior and overall participation and attitude during their time in school. These students will be rewarded with a prize from the school and a voucher from Catrina's Mexican Grill in Wasco.

6th grade Cougars of the Month

Yareli Vidales has been selected as one of the sixth-grade Cougars of the Month. She was selected because she keeps up with her schoolwork and tries to exceed what is expected of her. "I like to think of myself as an overachiever," she said. Yareli Vidales said because she has had straight A's in every subject beside P.E. throughout her entire academic career,

Yareli believes that she excels in all subjects. But, her favorite subjects are ELA and History.

This year, she is most proud of making new friends and keeping up with her grades. One goal that Yareli Vidales set for herself this year is to leave the sixth grade with a 4.0 GPA. Her goals for the future are to take honors classes, graduate both middle and high school with a 4.0 GPA, and to attend and graduate from Harvard and become a lawyer.

Yareli would like to thank her teacher for always helping her stay motivated, and her friends and family for being her motivation.

Josiah Maldonado has also been selected by his teacher as a sixth-grade Cougar of the Month. Josiah was chosen because he turns his work in on time, tries his hardest and pays attention in class. He believes that he performs best in ELA.

This year, Josiah is most proud of the school reopening and allowing the students to return to in-person, full-time classes.

His goal for this school year is to be happy and to do his best to be promoted to the seventh grade. He has a simple goal for the future, and that is to graduate and to be a good student. He would like to thank his mom, his dad and his teacher, Mr. Felix, for supporting him and his achievements.

Josiah stated that this past year has been bad for a lot of people and there was a lot happening in the world, but he hopes that will change and everyone has a good year.

7th grade Cougars of the Month

Nyomi Rubio has been selected as a seventh-grade Cougar of the Month. She was selected because she has a good attitude. She excels at history and science.

When asked what she is most proud of this school year, she stated, "being able to survive my classes." This school year, Nyomi's goals are to "get good at math and survive the rest of the year."

Joshgard Ruiz has also been selected as a seventh-grade Cougar of the Month. Joshgard was selected because he is a good student. He states that he excels most in History. He is most proud of having fun this school year at Thomas Jefferson, and has set a goal self to get good grades this year.

In the future, Joshgard would like to go to college, and he would like to thank his parents for always supporting him and his achievements.

8th grade Cougars of the Month

Jesica Santos Antonio has been selected as an eighth-grade Cougar of the Month. She believes that she could've been selected because she has perfect attendance. She excels in math. This year, Jesica is proud to have good friends. 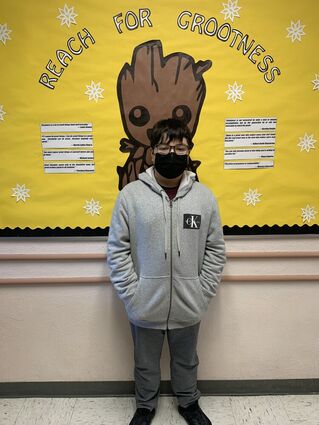 One goal that Jesica has set for herself is to get the grades that she needs in order to graduate. Her goals for the future include graduating high school, going to college and getting a good job to help her family. Jesica would like to thank her friends and family for supporting her.

Cristina Zarate (not shown) has also been selected as an eighth-grade Cougar of the Month. She was chosen because she turns all of her assignments in on time. She excels in science.

She says that graduating is what she is most proud of this school year, and she has set a goal for herself to graduate with a 4.0 GPA. One of Cristina's goals for the future is to get a good job, and she would like to thank Mrs. Margaret for supporting her and her achievements.