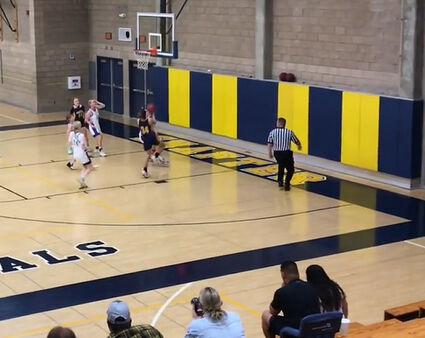 Addyson Hanner goes up for two after Shafter got a steal.

The Shafter High Lady Generals basketball team continued their season with a chance to capture a title as they begin their playoff season.

Shafter closed out their SSL season with a 6-3 record and a 15-9 overall record. The Lady Generals got two league wins against rivals Wasco about a week ago, with a 55-40 win and a 62-31 blowout of the Lady Tigers.

Leading the way for the Lady Generals were senior Natalie Herrera with 14 points, Heide Lindsey with 10, and freshman Eliyah Sanchez with eight points. Shafter hit five three pointers for the game, with Alexis Luna, a senior, getting two of them. They also continued their tenacious defense, forcing 22 turnovers and getting 12 steals in the game.

In the second victory against the Tigers, it was Ariana Vega leading the way with 14 points, with the Lady Generals getting balanced scoring, with three different players getting at least 10 points. Eliyah Sanchez had 10 points for the game, and Herrera added 12 points. The Lady Generals stopped the Tigers 38-23, forced 14 turnovers and grabbed 25 steals, with five different players getting at least four steals.

Throughout the season, the Lady Generals have played some tough competition, including powerhouses in the SYL Golden Valley, perennial favorite Morro Bay, and Righetti from Santa Maria.

With a victory against the Warriors, the Lady Generals will take on the winner of top ranked Sierra and #16 Ridgeview.