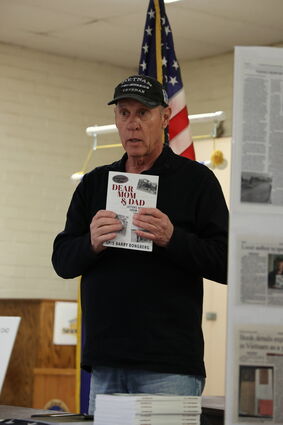 Barry Bongberg was the guest speaker.

The Shafter Kiwanis Club hosted local author Barry Bongberg recently, as he told the attendees of his experience writing his book, "Letters to Mom and Dad from Vietnam."

Bongberg also told of his experiences when he returned home from Vietnam after serving bravely for his country.

"Dear Mom and Dad- Letters from Vietnam" is the end result of a series of letters that Bongberg wrote to his parents while he was overseas in Vietnam between 1967 and 1969.

"I didn't even want to think about Vietnam once I got back home," said Bongberg, who also said that it wasn't very popular to let people know that you had served in Vietnam, with him and his fellow soldiers being spit on and screamed at. "I didn't even acknowledge that I had been over there for a long time when people I didn't know were taking about the war. I didn't volunteer any information about my experiences over there."

Bongberg told the members of his challenges he faced as a scared, young man who was sent to a foreign land to fight in a war that was not popular back here in the states. Writing letters to his parents back home helped ease the fright and the loneliness that engulfed him most days while overseas.

"I was just a young, 17-year-old kid who was scared out of his mind," he said. "I had to grow up really quick and these letters are almost a timeline of my growing up in that 13 months."

Bongberg had written a total of 268 letters in the 13 months he had been stationed in Vietnam. To his surprise, when he was cleaning out his parents' house a couple of years ago, he found a stack of letters that he had written that his mother had saved, even in chronological order. Bongberg's daughter, Erica, started reading the letters and Bongberg then read a few of the letters. Erica told her dad that she thought that this would be a project that would be worth the time of him typing up all of the letters, having a record of them for him and Erica.

"It started as a project that would end once I typed up a copy of the letters for me and Erica, something that we could save those memories in. It just grew from there," he said. 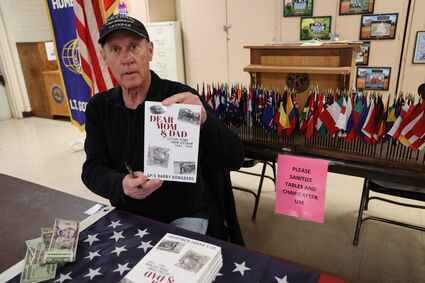 Barry Bongberg signed copies of his book for attendees.

Once Bongberg was finished typing up a copy of the letters for his daughter, he delivered them to her up in Northern California. While at her house, a friend of his daughter's, a publisher named Sara Olsher, read a few of the letters. Finding out what they were, Olsher thought this would be something that a lot of people would be interested in reading, suggesting to Erica that her dad think about putting them in a book.

Sadly, Bongberg's daughter Erica passed away from breast cancer before the dream became a reality, with Bongberg and Olsher working hard on completing the project.

After about a year of hard work, the project was finished and the book was published. It is now available on Amazon.

You can also purchase a copy from Bongberg himself.

All of the proceeds of the sales of the book go directly to Metavivor, a nonprofit organization dedicated to increasing awareness of advanced breast cancer and equity in research and patient support.