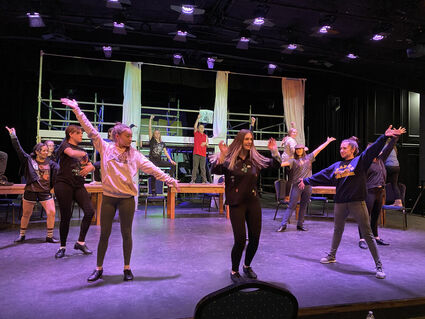 There are several challenging numbers in the production.

The Shafter Young Adult Theater is putting on a production of the Broadway hit "Newsies", which will be held at the Shafter Ford Theater from March 3-6, and March 11 and 13.

Led by Director Chad Givens, the production is based on the original production by Disney, which went on to be nominated for five Tony awards. 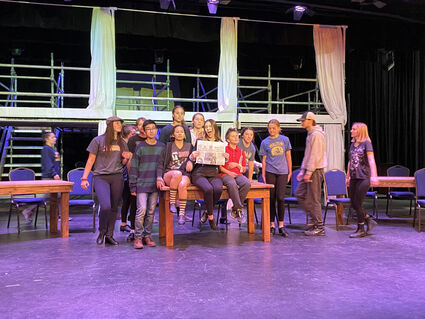 Director Chad Givens said that the majority of the cast are not dancers and have learned the steps on the job.

The story is based on a real event, a newspaper strike put on by a group of young delivery boys, who stand up to one of the newspaper powerhouses of the time, Joseph Pulitzer. Demanding fair treatment, rights, and a say in how their newspaper world is ran, the story follows Jack Kelly, Davey, Les, and a group of boys who dance and sing their way through an entertaining night. There is humor, dancing, singing, and a great message that results in you not helping but rooting for the little guy.

"This story is about never selling yourself short and not allowing others to look down on you because of your age, and what can be accomplished when a group unites as one," Givens said.

Jack Kelly is played by Jaime Jesus, with the roles of Davey and Les, played by David Bloemhof and Micah Neufeld, respectively.

Also included in the newsies gang is Lauren Givens as Romeo, and Megan Bloemhof as Finch. Lauren Givens and Bloemhof are no strangers to the group, with them delivering amazing performances in past productions, including in the Wizard of Oz, where Bleomhof entertained as the Scarecrow and Givens was in the title role of Dorothy.