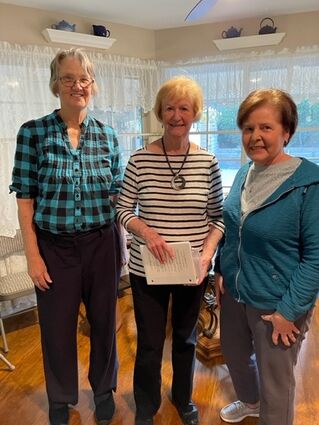 The Wasco Woman's Club held an orientation event for new members last week, sharing how the organization is making an impact and contributing to the well-being of those living in the city.

The new members were introduced to the group's mission and goals, including hearing about the club's rich history of service. The club, founded in 1923, has flourished as one of Wasco's most active and vital civic organizations.

The club is also proud to own the oldest adobe building in Wasco., which it rents for private functions and special events. Money generated is used to maintain the clubhouse and fund many community projects.

Next year the club will celebrate its 100th anniversary, and a big event is planned to commemorate the occasion. In preparation for that, the clubhouse is undergoing renovation.

Over the years, the club has directed time, money and interest to the needs of the Wasco community. They have strongly supported local schools and libraries, encouraged constructive activities for children and youth, promoted conservation and assisted with political functions.

"I am excited to join the organization," said new club member Sukie Martinez. "Many of their initiatives are important to me, and I look forward to helping the club realize its objectives to empower the residents of Wasco. I believe that the club is improving their quality of life."

Easter Smothers, a 60-year veteran, added, "I have stayed with the club for so many years because of how special my fellow members are. They truly care about Wasco, and I am proud to support and play a role in the club's success. I also enjoy the friendships and bonds I have formed as a club member over the years. It truly is a wonderful organization that makes a big difference in the local community."

Vice President Jill Drescher said, "We hosted the new member orientation to introduce our mission to them. We hope that new members will have a fulfilling and fun experience knowing that their support is crucial to the club realizing our efforts.

"Through the fresh ideas and creative imagination that our new members bring to the organization, we can thrive and better adapt to the needs of Wasco. We are always looking to serve the community, and if something is missing that no one else is addressing, we strive to feel that gap."

The club encourages women of all ages to join. Meetings are held every second Tuesday of the month at noon at the clubhouse, 1601 7th St. Membership fees are $45. The club encourages those interested to call (661) 303-3770 to sign up and become part of the group of women working for the betterment of Wasco.