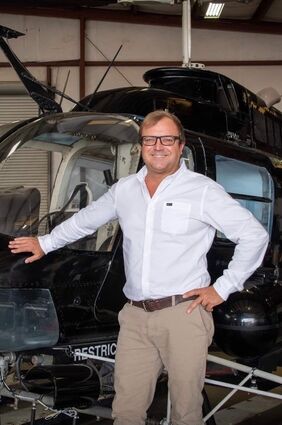 Steven Noel Wilson was born July 5,1968 in Bakersfield, to Noel Wilson and Janice (Putnam) Wilson. He moved from his earthly home to his heavenly home with his Lord and Savior Feb. 15, 2022.

He was raised two miles south of Shafter with his two younger brothers, Sam and Jay. Steve attended Richland Schools and graduated from Shafter High School in 1986. He mastered the trumpet during high school and enjoyed playing guitar, keyboard, piano and drums. After high school, he spent a short time in junior college and some time with YWAM in Hawaii and Fiji.

Steve accepted Jesus as his savior at the age of seven. After straying away from his Savior for a few short years, he returned and remained close to the Lord until his passing. Nikol True stepped into his life and they married in 1991. Their first son, Ryan Noel, was welcomed into the family Aug. 25 of that year. During the next nine years they had three more children – Caitlin Julianne, Cheyenn Nikol, and Logan Izquierdo. Their four children brought him his greatest joy in life. He spent most of his spare time surfing, water and snow skiing, skateboarding, hiking and traveling with them.

When he returned to Shafter, he DJ'd for 10 years which helped him hone his skills at the microphone. He also began learning to spray crops at his father and grandfather's company, Inland Crop Dusters as well as followed in his father and grandfather's footsteps by becoming a flight instructor. He then started his own flight school at Meadows Field Airport in Bakersfield. He learned to fly helicopters and found full-time employment with American West where he spent his next twenty years. He loved flying the big yellow Huey and perfecting the art of crop dusting. (You can watch a video of him flying the Huey by going to https://youtu.be/iE9LrL-IkNI)

Steve was the most dedicated, hardest working man known by his family and friends. He had many close friends and made everyone feel like family. He was quite a jokester and enjoyed making everyone laugh by being silly. Steve had the biggest heart and even took care of those he didn't know. He was very generous with everyone and enjoyed giving gifts to family and friends. He was especially generous when donating to his churches, various other ministries, charities and those in need.

Steve was preceded in death by his father, Noel, and brother, Jay. When Jay passed away he assumed the responsibility of operating Inland Crop Dusters, and when his father Noel passed away he became involved in the families' Ocuya Creek operation. He is survived by his wife Sheri, sons Ryan and Logan, daughters Caitlin and Cheyenn, grandchildren Remë and Hunter McClure, stepchildren Francois, Solange, Adrian, and Lina, brother Sam (Jill), mother Janice, nieces Jaymie and Taylor, and many beloved aunts, uncles and cousins.

In lieu of flowers, donations in his honor may be sent to Calvary Chapel Rosarito at 17451 Bastanchary Rd. Suite 203, Yorba Linda, CA 92886, Valley Bible Church in Shafter, or Minter Field Air Museum.

A celebration of life will be held at the Inland Crop Dusters hanger at the Shafter Airport on March 4 at 12 p.m.