At a special City Council meeting, the city's redistricting consultant, Flo Analytics, presented draft map options with accompanying summary statistics for review. The council then narrowed the maps down to three.

According to a City of Wasco staff report, cities with by-district election systems must redraw their district boundary maps to comply with the California and Federal Voting Acts.

The process to complete the redistricting requires a minimum of four public hearings and dedicated public outreach to ensure minority populations and communities of interest are aware of the redistricting efforts and are provided with options to participate.

During the first public hearing on March 1, Flo Analytics introduced the online mapping tool for the public to submit their draft maps by March 17.

At this second public hearing, draft maps were analyzed for population balance deviation and other required criteria.

Every 10 years, cities with by-district election systems must use new census data to review and redraw district lines to reflect how local populations have changed. This process ensures that all districts have a nearly equal population.

The redistricting process for Wasco must be complete by April 7.

The City of Wasco adopted its current district boundaries in 2018, based on 2010 census data as required by law. The districts must now be redrawn using the 2020 census data.

An analysis of the city's current district boundaries, adjusted for the 2020 census data, shows the districts are no longer population balanced.

District one is over 2,269 in population while district three is under 1,182.

"With this, we had some work to do," Alex Brasch, of Flo Analytics, said.

The draft redistricting maps were adjusted to comply with the targeted population range of 4,559 each. Draft maps four, five and six were close to this target number.

"We want to maintain districts without change if possible as long as the population within the districts have no major deviation from one another," said Mayor Gilberto Reyna.

"Also, these presented draft maps do not move any of the current council members out of their districts," Kent Martin, of Flo Analytics, said.

"Sharing your testimony at a redistricting hearing is a powerful way of shaping your city's district maps for the next decade. The more detailed and specific the feedback, the better," Martin said.

However, there were no public comments, and the public hearing was closed to continue with recommendations from the council.

City Manager Scott Hurlbert asked if any of those draft options out of all six resulted in any concerns over racial distribution or other metrics that Flo Analytics looked at across the districts.

"No. In all cases, the maps drafted comply with both the state and federal guidelines," Martin said. 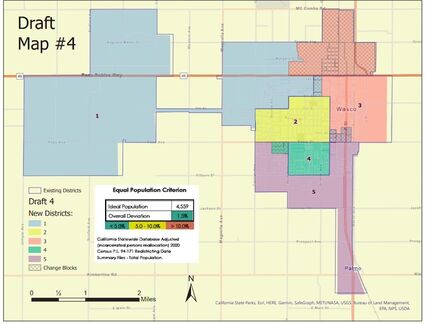 Reyna said the council should move forward with the map with the least population deviation.

"In looking at the maps, I think we should move forward with the maps with the least population deviation since that is the goal," Reyna said.

Given that, draft maps four, five and six were recommended to continue with the discussion.

A motion was passed to proceed with the three selected for further consideration at the third public hearing on Tuesday, March 29.

The final map will be posted then presented at the fourth public hearing on Tuesday, April 5. It will incorporate City Council, public input and elements of the revised draft maps.