Chamber honors the best of Shafter 2021 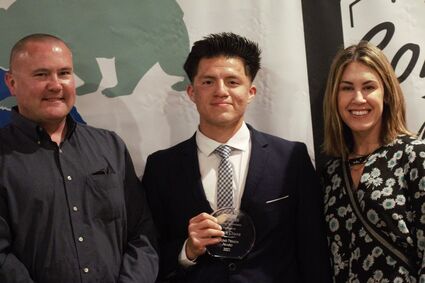 The Young Person of the Year award was given to Yahir Dimas.

The Shafter Chamber of Commerce held their annual Awards Banquet on Thursday night, honoring the outstanding individuals and businesses who made an impact in the city in 2021.

The banquet included a silent auction and a dinner before the awards were presented.

Among those honored were the five girls who had a dream of beautifying a blank wall across from the Shafter Learning Center. The girls received the Arts Group Award.

Alondra Montalvo, Khloe Verdugo, Sierra Albiar, Brinlee Swann and Seniya Schluter were in a class at the Shafter Learning Center and thought that there was an opportunity to dress up the space across from them, at a blank wall by Hacienda Market.

They began to dream about the possibility of a mural at that location. Working together with Listen to Shafter, these students brainstormed design ideas, advocated for the project, and helped select the artist.

Castillo, who had moved to Shafter three years ago, had experience painting murals up in Watsonville, where she had moved from.

"I didn't think that I would ever paint another mural, but this project touched my heart, and I wanted to be a part of these young girls' dream," said Castillo.

The mural is titled, "A Wall of Dreams," and depicts a various display of dreams and hopes that are in the minds of our local youth, from science and math, to art, sports, and possible careers. Each girl received her award and said a few words.

Sierra thanked Katie Wiebe, who helped spearhead the project, as well as the artist.

"I want to thank Lorena Castillo, who allowed us to help paint the mural with her and her kids. I think that the project wouldn't have been as special without her letting us be such a big part of the process," she said.

Debbie Haley, of the Chamber of Commerce, presented a special award to Nina Barraza, mother of local hometown hero Ricky Barraza, who was killed in action in Afghanistan.

Rick Woody and his staff revitalized their property with a new waiting area, a modernized chapel area and a beautification project that made the business stand out above the rest. They will be celebrating their 50th year in service to the city this year.

"We have served the community of Shafter for almost 50 years and we have such a wonderful relationship with the city," Woody said. "My family has been blessed to be a part of the history of Shafter and look forward to continue the relationship for future generations."

GAF Roofing Materials, Shafter, has been a major contributor in many projects the past few years in the community.

This was spotlighted in a major way this past year, with the company teaming with the Shafter Learning Center in its expansion project. The result is a space that includes new classrooms, a large outdoor shaded area, a lab for different classes, and a new reception area.

Nigel Abraham said the project was a collaboration between GAF, the Learning Center, and the City of Shafter and it wouldn't have been possible without the teamwork that was shown.

"This award goes to everyone on our team, from my wonderful staff at GAF, the City Council who worked with us, and David Franz and the Shafter Learning Center, who allowed us to be small part of this amazing dream," Abraham said.

Lynnda Martin, of American Refuse, has been working hard to prepare the city for the new waste and recycling laws taking effect this year, as well as helping them reduce their waste that ends up in the county landfills. Martin has spearheaded many projects benefitting the community and was honored with the Community Service –Business Award. 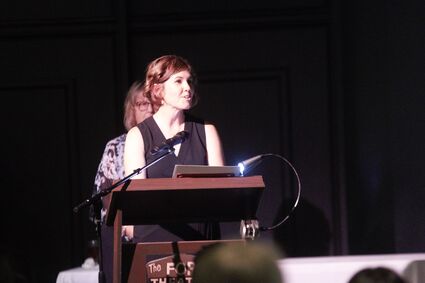 Katie Wiebe was honored for her many contributions to the community.

Bakersfield College now operates the library, staffing the facility. They also are going to use the space to offer even more classes and services to the community.

Craig Haley was the recipient of the Humanitarian Award. Haley has been involved in many community projects, including in his church, Kiwanis, and many more organizations and causes.

The Young Person Award was given to Yahir Dimas. Dimas has written his own books, giving them to the elementary schools as part of their reading options. He also has donated his efforts and time for a variety of causes and projects in the city, especially in the local schools.