Passion of the Christ reenactment returns 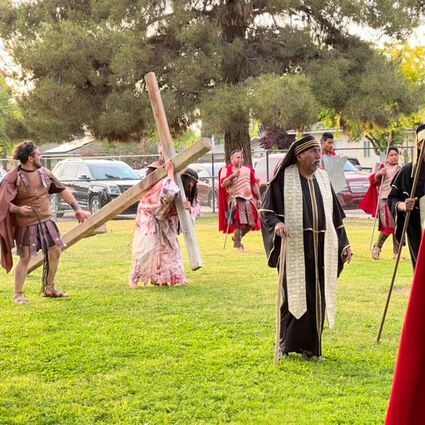 The St. John Evangelist Parish gave a moving rendition of the reenactment of the crucifixion of Jesus Christ in a large production with over 25 actors dressed in historical costumes. They provided an accurate representation and wowed the audience with an original show, complete with an elaborate stage and custom lighting.

Celeste Arreola participated in the event and played one of the royal dancing ladies in waiting.

"Today was special because it was Good Friday, and we got to celebrate the passion of Christ. It showed how he sacrificed himself for us," Arreola said.

"I was happy that we were able to resume the production after covid."

Actors enjoyed the relationships they developed with the cast.

"The best thing about it is how close you get with the other actors," said Alexandra Martinez.

"The event was exciting because the team worked really hard to perfect the play. I loved working with my fellow believers and especially performing before a large audience."

There were almost 200 in attendance.

Many actors saw it as a symbol of faith.

Avelardo Vallecillo, who played one of the apostles, said, "I wanted to feel closer to Jesus and experience how he gave his life for us."

Iris Paredes said, "It was important because we got to learn what Jesus went through and everything he stood for."

"It is always a touching experience to remember all of the suffering Jesus experienced to take our sins from us through his resurrection, which is what we honor on Easter Sunday," said Mayor Gilberto Reyna.

It was a family and community event.

"We came from McFarland with my whole family. It was important to share this experience with my children," said Betha Rosales.

"The best part is that it brings the Catholic community together. It was good to see many people here, especially after a two-year hiatus due to the pandemic," said Mayor Reyna.

Some came because it was a tradition.

"I have been coming since I was a little girl, and it gets better each time. It is something we have been doing as a family for many years," Maria Rosas said,

The audience was impressed.

"The acting, costumes and stage were amazing," said Teresa Cortez. "I thought it was authentic."

Vianney Alvarado said, "I think they did an excellent job. I like how everybody stayed in character, and it was exciting how they paid attention to details to show us what happened."

"I was fascinated with how they actually put Jesus on the cross. It was incredible and a special touch," said Laura Martinez.

"Everything was great, and I connected with my higher power," said Alejandro Morales. "I felt like everyone was united." 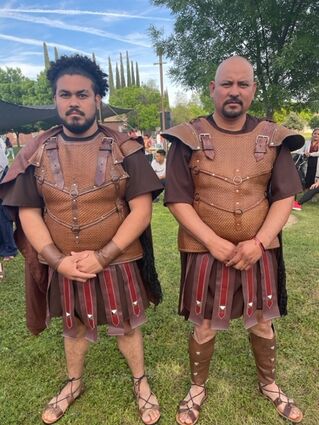 Fernanda Rodriguez said, "It was very entertaining, inspiring and suspenseful."

Much effort went into it.

"We practiced for a month, sometimes for three hours each session. This was my third year playing Jesus. I do it for my faith and to share the message that Jesus died for us," said Eulogio Arreola, who volunteered to design the stage and props and coordinate the lighting and special effects.

"A great deal of work was put in, and I am happy that it all paid off," said Arreola.

"I appreciate everyone who participated in making today memorable," Father Guillermo Preciado said. "It was a compelling performance that I think touched the hearts of those that came."