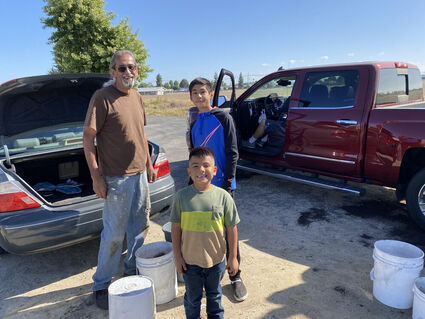 This resident and his two grandsons made a couple of trips to get compost.

Lynnda Martin, of American Refuse in Wasco, said that that the firm decided to try a giveaway event for Earth Day, not knowing what kind of response they would receive. Well, she got her answer with a steady flow of vehicles loading up buckets, barrels and trailers with free compost. "We decided to try it to celebrate Earth Day, and the response was great," Martin said.

The compost came from the Mount Vernon recycling plant. Martin said that the majority of the organic waste collected at the Shafter Landfill goes to the plant in Bakersfield. They brought a large trailer full of the compost, not sure if they would need much of it, with it being the first attempt at the event. "There were people coming back two or more times with buckets, barrels and trailers for the compost," said Martin. 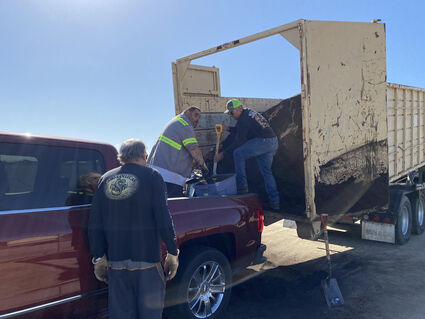 The event attracted a steady flow of vehicles.

Compost is a mixture of ingredients used to fertilize and improve the soil. It is commonly prepared by decomposing plant and food waste, and recycling organic materials. The resulting mixture is rich in plant nutrients and beneficial organisms, such as worms and fungal mycelium. Compost improves soil fertility in gardens, landscaping, horticulture, urban agriculture, and organic farming.

When asked, one resident, Richard Garza, said at the event, "I use compost for my wife's garden. She loves to plant flowers in one section, and has another section that she grows peppers, cilantro and some other good stuff."

Garza said that events like this are great. "That stuff isn't cheap, and is a lot of work to make yourself. This was really nice."