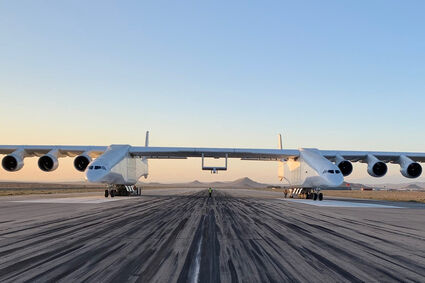 This launcher takes up the entire runway.

Members of the Minter Field Air Museum recently got the chance to tour one of the most advanced space and air facilities in the nation when they visited the Mojave Air & Space Port, which is housing the Virgin Galactic, which is preparing spacecraft that will allow civilians to go into space.

They have built a launcher that has gone up in space and has orbited the earth, and also tested craft that have carried people into space and right back down again, preparing for the time when passengers will be able to venture into space commercially.

The museum members were able to get an up-close look at one of largest aircraft in the world, with a wingspan of over 200 feet wide, barely able to fit on the airport's runway.

According to President Ronald Pierce, the group was able to take just a few pictures, since a lot of the venues they visited were security-sensitive areas.

Pierce said that the tour lasted about five hours. "We started the tour at around noon, and ended the tour at about 5 p.m. It was an amazing time. The aircraft and the technology was incredible."

He said the group was invited to return to the facility once they settled down a little bit, with the majority of the projects concluded or further along in the process.

Included in the tour group from Shafter was Evan Su, a student in Shafter who is a museum docent in training; Mike and Scott Hogstad, museum board members and Docents; Alan Anderson from museum; and David Cosimati, a computer technician and museum board member. 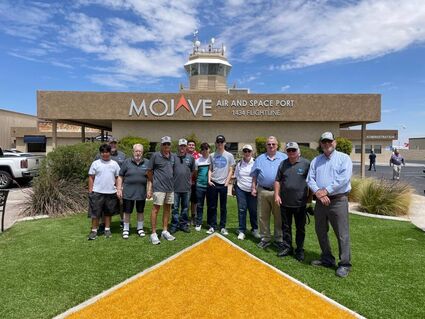 Virgin Galactic has recently put a craft into space that was unmanned, giving the crew and staff information about the environment up there, as well as what requirements will be necessary to travel into space with manned vehicles.

Pierce was amazed at the size of the spacecraft, with the launcher taking up the entire width of the runway. "It was huge. It took up the whole runway and they told us that it was used to launch orbiters into space."

Virgin Galactic has put civilians into space for a 90-minute journeys. Passengers experience minutes of weightlessness as the craft soars through space, giving the passengers the experience of a lifetime. Their ultimate goal is to make it commercially feasible for people to travel into space regularly. With the successful ventures into space that have been completed, they are getting closer to this goal and hope to have the future for spaceflight within its grasp.