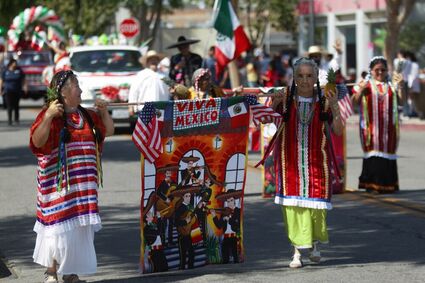 The Cinco de Mayo Festival made its return to the streets of Shafter on Saturday, packing downtown with over 1,000 viewers.

The celebration kicked off with a parade that came down Central Avenue, with local news anchor Jose Gaspar as its master of ceremonies. Gaspar welcomed the crowd to "the triumphant return of the Cinco de Mayo celebration, after a two-year hiatus due to the covid-19 pandemic. It is great to see all of the people here to celebrate this event, which is a statement of unity and one of the first chances we have had to come together as a community."

A former councilmember and hometown hero on and off the gridiron, Manuel Garcia was the Grand Marshal for the parade. Garcia said that he was "honored for the opportunity to serve as Grand Marshal and show this city how much it means to me and my family."

There were over 50 entries in the parade, including the Richland Trojan Marching Band, the Shafter High School Generals Band and other local schools with floats.

There were also a number of classic cars, trucks and other vehicles, including tow trucks and semis, lit up in the red, green and white colors of the Mexican flag.

The members of the perennial favorite Brinco del Chinelo, from Morales, Mexico, were dressed in traditional festive brightly colored feathered costumes, with drums pounding, dancing down the street to the cheers of the large crowd. 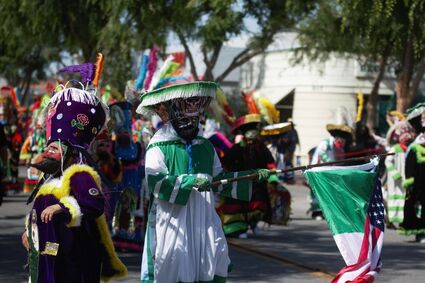 Walker Senior Center residents, attired in traditional dresses, danced down the parade route and delighted the crowd. "I hope I have that much energy and spirit when I am that age," commented Mario Monteno, who was attending the parade with his children. "I think this is great,"

A group of classic cars bounced their way down the street, with a number of them dancing with their hydraulic systems on their vehicles.

Another crowd favorite were the vaqueros and their equine companions. The horses danced, keeping time with their riders and the music accompanying them. A number of the horses entertained the crowd with stepping high and rearing up, showing their control and beauty.

At the conclusion of the parade, the crowd made their way to Mannel Park, where the celebration continued well into the evening.