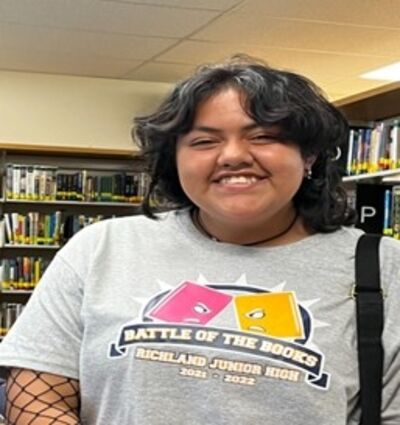 Marlene Ayon placed in two of the four rounds of competition.

Marlene Ayon, a seventh grade Richland Trojan, was recognized recently for placing in a countywide competition, Battle of the Books, which sets students against each other in testing knowledge of books that were placed on a reading list of 28 books. Ayon, in four rounds of competition, placed in two of the four rounds.

Battle of the Books began in the 1990s, and now has over 1,700 students participating. The competition encourages students to read literary sound books and compete against fellow students while having fun doing it.

The competition exposes students to different authors and genres that they may not read if not given the incentive.

Richland Superintendent Rosa Romero said that the district is very proud of Ayon and congratulates her on all of her hard work and determination to learn. Ayon received a certificate and a medal for her outstanding performances.