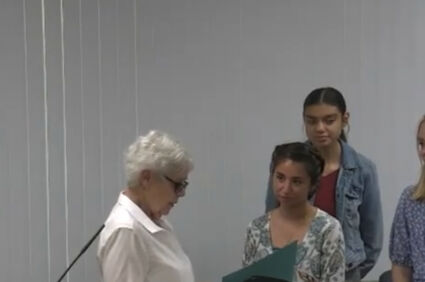 Mayor Cathy Prout presents Faith Bazaldua with a key to the city.

The City of Shafter plans to spend about $27 million for capital improvements in the next next year.

The City Council discussed the Capital Improvement Program and fleet equipment requests for 2022-23 at their meeting Tuesday night. According to Public Works Director Michael James, the amount of monies projected to be used for capital improvement projects is about $27 million. Fifty-four percent of this total is projected to be used for streets and road projects, with about 29% flagged for water projects.

These projects include Well 21, to serve the Gossamer Grove area, which would get the area off the North Kern Water District system. This is important because of the limit set by the Nort of the River District for Gossamer Grove.

Within the Streets and Roads Division, there are several projects underway and expected to be started this fiscal year. One is to give Santa Fe Way a sufficient shoulder.

Another project is the Highway 43 roundabout. A environmental study has been ordered and will be completed this year. James noted that the building of the roundabout will be done by Caltrans.

For the General Fund projects, City Manager Gabriel Gonzales said that there will be a $300,000 reroofing for City Hall. This follows a recommendation to keep City Hall in its current locations, with improvements being done to the existing buildings.

The proposal follows complaints by residents about speeding by some vehicles, and requests to have a permanent presence of officers in the area.

Also discussed was a waste water project that would extend the existing pipeline at Seventh Standard Road to the Gossamer Grove area.

The council hosted a public hearing on the regional transportation plan put together by the Kern Council of Governments, reporting on county transportation needs.

The council also recognized the Distinguished Young Woman program of Shafter, which took place in April. The event is one of the largest scholarship programs for junior girls, giving them over $5,000 per year. The program allows participants to make new friendships, gain self confidence, and earn scholarship money.

Recognized were Faith Bazaldua, Shafter's Distinguished Young Woman; Juleebeth Diaz, First Alternate; Cassandra Gutierrez, Scholastic Award and Spirit Award winner. Laura Neufeld, winner of the Talent Award, was also recognized, along with Jessica Moreno Bravo, the winner of the Fitness Award. Bazaldua will go on to represent Shafter in the state competition, which takes place in Bakersfield in July.