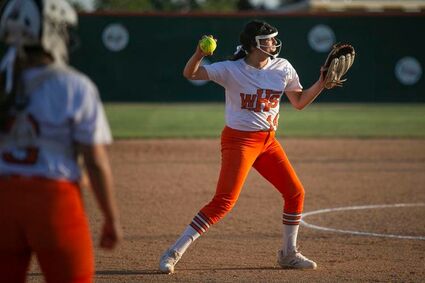 Freshman Cedes Saldana throws to first base in the win against the Rams. (Bakersfield Californian)

Wasco came into the final contest riding a 2- game winning streak, going undefeated in the South Sequoia League. The Lady Tigers began the Valley tournament with a 5-4 victory over Kerman, the 15th seed, with Wasco the No. 2 seed. The Lady Tigers followed that win with another nail-biter against seventh-seeded Tulare Union, winning that game by the same 5-4 score. Both games were won on Wasco's last at bats.

In the semifinal game, the Lady Tigers went up against former SSL foes the Garces Rams. With the game scoreless, the Lady Tigers got a hit by sophomore Gabriella Milligan, bringing in Tiffany Mello for the only run of the game to earn a spot in the final at Fresno State.

The Lady Tigers just couldn't get any offense going in the final, not getting that much-needed spark that they had generated in the previous games.

But, the future of Wasco High softball looks very bright, with the majority of the team underclassmen. Freshman pitcher Cedes Saldana, who pitched a complete-game shutout of Garces in the semifinal, giving up only three hits, is just one of many underclassmen that the Lady Tigers have on the roster.

Wasco High Coach Sonia Wedel said that this youth was actually a strength when it came to playoff time, with it shielding the Lady Tigers from getting nervous in big games, like the semifinal win over Garces. "I was stressed over that game for a week," said Wedel, about the Garces game.