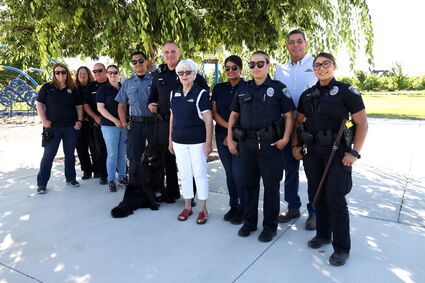 The residents of Gossamer Grove were able to meet the men and women in blue serving the city of Shafter as members of the Shafter Police Department on Saturday, with a Flight Park Saturday Coffee with a Cop event.

Residents of the megadevelopment on Seventh Standard Road were able to meet with the officers, voicing any concerns they may have, as well as ask questions. The event drew a good crowd that expressed their satisfaction with the performance of the Police Department in the Gossamer Grove area.

The event was held at the Flight Park in the Gossamer Grove development, also home to the first dog park in Shafter.

Residents of the two- and four-legged variety enjoyed the chance to meet with the people that work to make sure they stay safe. 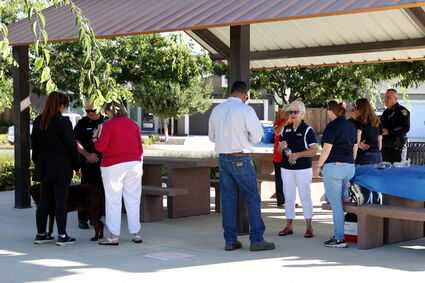 Residents were able to meet with the officers and ask questions of any concerns they may have.

According to Assistant Chief Diana Barnett, the residents at the event were very nice and had a lot of good things to say. "It was such a great event. The people were so nice, and they were very happy with the Shafter Police Department and its role in protecting them."

"I have been here almost a year, and it has been great. You can notice a police presence in the area. Sure, it would be great to have some sort of station out here, but they are still doing a wonderful job."

One of the discussions was the plans of putting at least a small substation out in the Gossamer Grove area, making it a more permanent presence in the area, a plan approved by the Shafter City Council. The city expects to begin working on installing the substation this year.