Tigers off to a good start 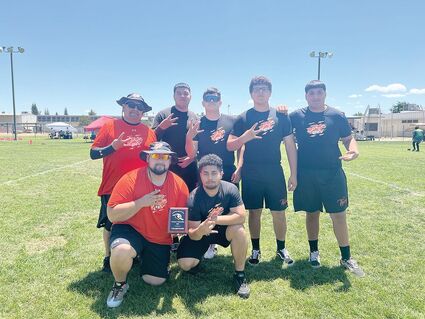 "This tournament and competition is among the largest and most popular in the area. We played against six high schools from the Valley," said head varsity football coach Chad Martinez.

They won second place overall in the passing tournament. "We are not traditionally a passing team, so it is a good sign for the season."

Passing is a scrimmage that does not require pads like a traditional game. A scrimmage is practice game that will not count for the end of the season's wins and losses.

"It was really exciting because our players got a lot better. They showed great spirit and are starting to open their offense up, which will help us in the season," he said.

Martinez said they had a great group of guys last year, and this year they have another outstanding group coming through.

"We will do our best to get to where we left off last year."

Last year the team went undefeated in the regular season and beat Centennial High School, a division one school. "We are Division Four, which meant we played a very good school," the coach said.

In addition to doing well in the passing tournament, they placed first in the lineman competition, beating Clovis East High School and Hanford High School.

The lineman competition is a series of events that the linemen go through that test their strength and athleticism.

"It was a good showing because we beat both teams, which are powerhouses in the Valley."

The season starts in August, when they will play Bakersfield's South High School.

"They were a playoff team last year. It will be a challenging game." But Martinez said they will be ready.

"We have continued to improve each and every day, and I'm excited to see this team's potential."

Playing on an organized team impacts the players for the better.

"I think it has a multifaceted effect on them. Their grades improve because they have to remain eligible, somewhere to be that keeps them out of trouble, and they learn many life skills."

The players put in much effort practicing Monday through Thursday for two hours a day.

"We never stopped training throughout the school year, and we started practicing again on the field as soon as school ended," he said. "We switched our training regime to incorporate more full-body strength exercises, which has paid off."

The players display a high level of commitment.

"They demonstrate this by showing up and working hard every day."

The team has big plans.

"It would be nice to repeat the wins we had last year. We have our work cut out for us because last year, we were one of the best teams in the Valley. We hope to continue the strong Wasco High School football legacy."

Their fan base is strong. 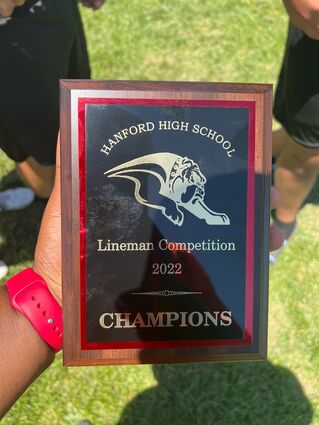 The players were proud of their 2022 Lineman Championship award plaque.

"The community is extremely supportive. Each of our away games last year felt like a home game because of their love for the football team."

Sponsors keep the team thriving; their many sponsors help buy spirit gear and always ensure that the boys are fed before they compete, as there are weekly lunch sponsors.

"We could not do a lot of what we do without our sponsors because they are always extremely helpful and assist us financially."

"Their confidence runs deep, especially after our recent wins where once again we showed that Wasco High School football has one of the best traditions in the Valley," says Martinez.