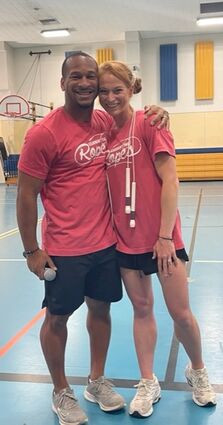 Nick and Kaylee Woodard combined have more than 40 years of experience in the jump roping sport.

Learnin' the Ropes is a non-profit dedicated to teaching and inspiring others through the sport of jump rope. They recently performed at all Wasco junior high schools, including Thomas Jefferson Middle School.

The organization is based in Bowling Green, Kentucky. It is run and founded by the husband and wife team Nick and Kaylee Woodard.

Since launching in 2017, they have presented to schools, churches, conventions, camps, workshops and corporate events.

They have also performed at half-time shows for the NBA, WNBA and college teams.

"We adjust our performances to fit any audience. Our school shows work well for any grade level from kindergarten to adulthood," said Nick.

Throughout the years, they have presented to almost 100,000 students annually.

They partner with schools to enhance their jump rope units and teach PE daily classes.

"We also have pre-recorded resources that PE teachers can use to teach their classes while we are not there," said Kaylee.

They have several messages they want to get across with their shows.

"We like to teach kids and inspire them to be not self-centered but others-centered."

'Our central message is to follow your passions and put your all into anything you do. We want to instill in them determination and a passion for life because we know this carries over into the classroom," said Nick.

They teach jump rope because of the positive impact that it has had in their lives.

"Jump rope as a sport has given us so much joy and opportunity for growth. We hope to introduce the sport to other kids so they too can experience that same joy and growth," said Kaylee.

Nick has been jumping roping since 1st grade and Kaylee since 2nd grade.

"Once we learned that you can travel, compete and meet people from all over the world, we fell in love with the sport," said Nick.

They have performed and taught in over 20 countries, including China, South Africa, Tanzania, Burmuda, Germany and France.

Both have won multiple world and national championships. In their routines, they incorporates splits, acrobatics and gymnastics.

They have been featured in the New YorkTimes, Good Morning America and Game of Talents, to name a few.

Their goal is for schools to have more jump rope programs.

"We want to make it an accessible sport and activity for everyone to participate in," said Nick.

Julissa Contreras said that she liked the show because it motivated her.

"It was inspirational, and I learned I must work hard to go after my dreams," said Contreras.

The sport was new to the students.

"I hadn't ever tried jump rope, so for them to come and do all these tricks was really fun," said Philip Harrison.

"It was also cool that they said you must try and be your best at school and sports."

Those that volunteered to participate enjoyed themselves.

"I was a volunteer, and it felt pretty good to come out and do something different while my friends cheered me on. It was an example of teamwork," said Harrison. 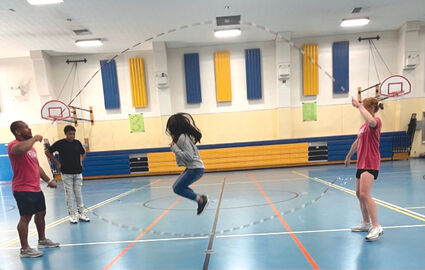 Nick and Kaylee Woodard, with a student, participate in a jump-rope game played with two long jump ropes swung in opposite directions so that they cross rhythmically.

The show was inspirational.

"It inspired me to think of all the new things I could do," said Ashley Curiel. "To never give up and follow your dreams even if people doubt you."

Principal Danny Arellano said he hoped to bring a special activity to his summer school students.

"I wanted them to have a different experience other than just coming to school. The intention was for our students to set goals, never give up and know that it will take determination," said Arellano.

To schedule a unique jump rope engagement and for more information, call (281) 743-2375 or visit their website at http://www.learnintheropes.com.