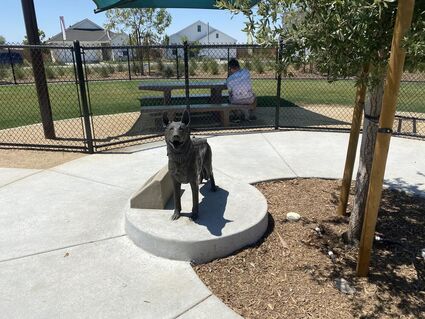 A statue honors the service of military dogs in the United States.

Farm Park was opened with a ribbon-cutting ceremony last month, with residents getting to check out the new facilities, including a ball court, a dog park and a landscape that resembles a farm.

It is replete with rows of plants resembling rows of crops, with farm equipment displayed on the site, giving kids an up-close look at a farming landscape.

The 3.25-acre park was designed by WSLA, in collaboration with landscape architect Jim Stebbins. It was designed in tribute to the agricultural history of the city of Shafter. The farm concept is reflected in rows of crop-like shrubs with meandering paths cutting through the farm and play area.

The playground equipment is constructed with depictions of things found on a real farm. A large central pasture provides open play on grass and is surrounded by a path and shade trees. The park accommodates residents of all ages by having a variety of programmed spaces around the open lawn as well as Shafter's first dog park.

The dog park has a statue of a military service dog at its center, paying tribute to the critical role of these animals.

The park has three different fenced-in areas that come with water fountains for pets, as well as waste stations complete with poop bags and receptacles. 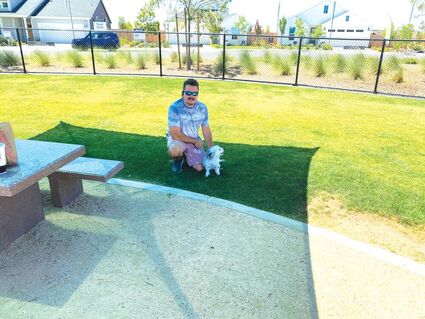 John Borne and his little guy enjoy the new park.

The dog park is a wonderful improvement, according to residents of the Gossamer Grove area.

John Borne, a resident in the Gossamer Grove area, was at the park earlier this week with his dog, letting him play on the grass and run around the grounds. "I usually keep him around the house, but with the park opening, it is great to have somewhere he can come to run around and play," he said .

Borne is a transplant from the Sacramento area, relocating to the area for work. "I love the area and it has been a great place to live since we moved."

With the last residential phase of the development under construction, the next process is attracting the retail developers to fill in planned shopping and services for the area.