Shafter Fire Department mourns one of their compatriots 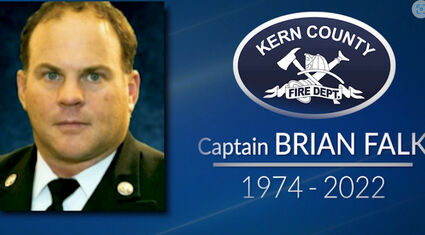 The members of the Shafter fire station lost a compatriot from Fire Station 23 in Fellows when it was announced that Fire Captain Brian Falk passed away suddenly on Thursday July 14.

Department team members were in a procession that escorted Falk from Fellows into Bakersfield to Kern Medical Center.

The procession included a helicopter, as well as engines from all over Kern County. Falk leaves behind a wife and two young sons.

The processional is a tradition with fallen firefighters. "When you are with the department, you

are part of a family. We are here to support you and you are never alone," said Fire Chief Aaron

Duncan. "We were with him all the way from Fellows to KMC."

The department has not yet commented on the circumstances surrounding Falk's death. They

Duncan, who went through the Academy with Falk, said that he has received calls from their

fellow academy members from years ago, other county agencies, and fire departments from

their stations if they hold a service for Captain Falk.

Duncan saw Falk go from a cadet to a Fire Captain in six years, which Duncan said is not very

Falk was also a great family man, having a wife and two sons, who, according to friends, were

the love of his life.

Duncan also said that even though Falk was a shorter man, he was a big man in stature. "When

he walked into a room, you knew he was there. His smile could light up a room."

Falk will be missed by not only the Fire Department family, but the entire community for his

dedication and love for his job and the city.