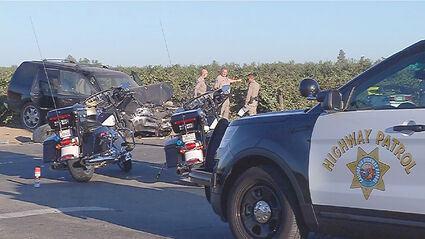 A Wasco man is under investigation after being involved in a traffic accident that resulted in the death of a 1-year-old child and the injury of five others.

Irving Rodriguez-Barraza was reportedly driving a Dodge Ram eastbound on Burbank Street when it collided with a Jeep Cherokee driven by Bakersfield resident Jesus Tejada Sanchez, 29. Rodriguez-Barraza had a passenger with him, Cruz Carrillo Olvera, 48, of Wasco. Sanchez had an adult passenger, Joanne Figueroa, 34, and two children, 1 and 4 years old.

They were traveling on Shafter Avenue approaching Burbank Street on Saturday afternoon at about 4:30 p.m. Rodriguez-Barraza is suspected of running the stop sign at the intersection and crashed into the left side of the Jeep, pushing it into an almond orchard, according to California Highway Patrol officials. The accident resulted in a power outage, with customers without power for several hours.

The Jeep hit two power poles and an almond tree before turning over on its left side. The Dodge Ram hit a stop sign.

The 1-year-old child was pronounced dead at the scene. Five other victims were taken to area hospitals for treatment.