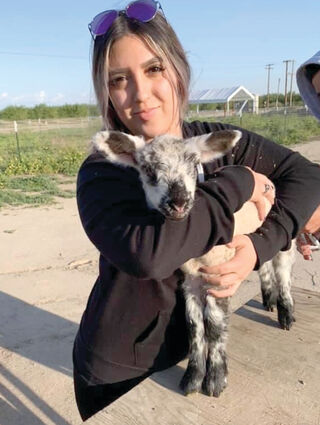 Addison Tatum with one of the lambs she helps to take care of.

Addison Tatum is a 22-year-old student born and raised in Wasco. On July 13, she won the 2023 Kern County Miss United States Agriculture title, which made her eligible to compete at the state level next year in January. If she wins this, she will go on to represent the state at the national pageant.

The role of a queen is to promote the agriculture industry through the pageant's motto of "teach, inspire and advocate."

Queens attend events, including fairs, festivals and conventions. They create a platform to raise awareness for those willing and interested in learning more about the industry. In addition, they visit schools to teach curriculum, conduct labs and read books to young students.

Tatum believes she is ready for the queen crown because of her diverse education.

She attended Wasco High School and graduated in 2018. She went to Taft College for two semesters and later transferred to Bakersfield College, where she graduated in May of 2021.

Currently, she is a senior at California State Bakersfield, majoring in liberal studies.

Her experience in agriculture runs deep.

"I have participated in Future Farmers of America since my first year at Wasco High. I showed animals at the Kern County Fair and became very involved in the club by joining judging teams and attending conferences and monthly meetings. I also held leadership positions like treasurer and vice-president," Tatum said.

Throughout her high school career, she received many awards, including winning the FFA Star Chapter recognition and State Degree, based on how well she did raising money from her FFA project and participating in community service. Other awards she received, like the Dekalb award, were for her leadership, superior scholastics and agricultural work experience.

A year after high school, she received the National FFA Degree, the highest award in the FFA organization.

Tatum works for the Wasco Union Elementary School District as a site supervisor for ASES, an after-school education and safety program. She helps students with their homework and encourages youth to join clubs and become involved in other enrichment projects.

As part of the state Miss United States Agriculture Pageant where she will compete, there is a one-on-one interview, an on-stage question component and an evening attire presentation.

Tatum believes she is the best candidate.

"All of my years in agriculture have prepared me for this title. I have demonstrated a passion and love of agriculture that I want to share with the community."

She said she wants to win because not many people understand agriculture or where our food comes from. In particular, she hopes to open doors of opportunity for young women.

"I want to advocate for the industry because there is a lack of female representation and hope to be that role model for them," said Tatum. 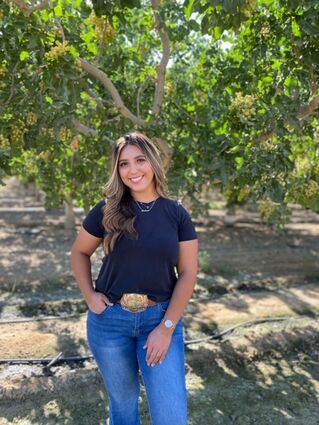 Addison Tatum has a love and passion for agriculture that she has cultivated over many years.

Tatum has continued to hone her appreciation of agriculture by also working for Morales Livestock.

"I believe this experience is helping to prepare me for the pageant and my future career as a school teacher specializing in agriculture," said Tatum.

She feels proud to represent Wasco.

"Even though we are a small town, I am grateful for all the support. I hope to do my best on behalf of Wasco to spotlight everything great we have to offer."