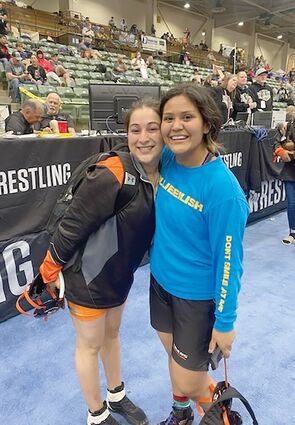 Julieta Aispuro and Aracely Gomez at the Reno World Championship, where they earned their All-American titles.

Since 2009, Wasco Families Wrestling has empowered young people through the sport. Thousands of students have benefited from the program, instilling in them the importance of education and inspiring them to work hard at their goals.

Vice President Juan Gallardo started his career as a wrestler at the early age of nine in elementary and later as a junior and senior in high school. In his first year of college, he became a coach.

"I have been a coach going on 27 years, most of my time in this role spent in Wasco," said Gallardo.

He said he loves coaching by motivating the unmotivated.

"It is a challenge to take kids who don't know how to wrestle and turn them into wrestlers. This means you must always believe in them, even when they struggle to believe in themselves," Gallardo said.

As a coach, he strives to unlock the potential that the athletes never knew they had.

"It is fun to see their eyes open with joy knowing they did something they thought they couldn't do."

Gallardo serves as a father figure and mentor.

"I wear a lot of hats. I discipline them, treat them with respect and hold them accountable, like focusing on their homework. We talk about student-athletes and stress how to be good people in this world by showing them to be supportive teammates, honor their parents and teachers and be responsible."

"I also work with their probation officers, as some of our kids have gotten in trouble with the law. For many of these, we have turned around their lives," said Gallardo.

He has a strong team of coaches and assistant coaches with over 97 years of combined experience.

The head coach for the girls is Joe Blanchard; the assistant coach is Danny Arellano, who is the principal at Thomas Jefferson Middle School.

For the boys, Gallardo is the head coach, and his assistant coaches are Garth Wara and Anselmo Arellano, Danny Arellano's son.

There is an average of 35 students participating, and they work hard all year long.

They train at the Wasco High School campus wrestling room.

"They have built a beautiful mat room. It is gorgeous," said Gallardo.

During the year, they participate in clinics and tournaments and work out at different clubs, including in Fresno, Clovis, Bakersfield and Delano.

All his students are outstanding, but a few that stand out have attained the title of All-American by placing at national tournaments.

He considers Iris Aguero, 15, as the most talented of them all.

"She does Judo and different styles of Taekwondo and has competed all over the country, even competing against adults," said Gallardo.

Recently, Gallardo was presented with a certificate of recognition from Mayor Gilberto Reyna and the council.

"I felt honored and was blessed to accept the award."

He said he is humble and is someone that just wants to have a positive impact on these young kids. 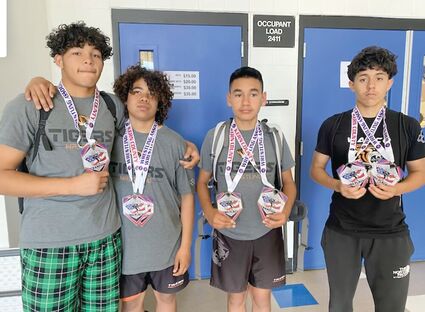 Wasco Families Wrestling tries to serve an important purpose in the community.

"We are the muscle of Wasco and help clean up garages and alleys, cut weeds, put up Christmas lights and move people from one house to another. We also assist women who have lost their husbands, and at weddings and birthdays, we set up chairs and tables, staying behind to do all the dishes."

The price to enroll is very affordable.

"We offer one of the county's lowest costs and also give scholarships. There is help with uniforms and entry fees for competitions," said Gallardo. "We try to give every family a chance because we know some struggle.