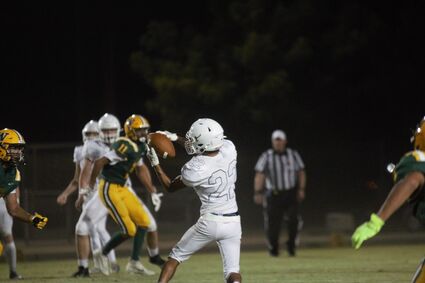 Jesus Vasquez gets a reception for a first down

The Shafter High Generals opened their season with a big win over the West High Vikings, 46-6, on Friday night.

With the task of replacing 80% of their offense with the loss of Devon Sundgren and Tyson Dozier from graduation, the Generals got a big boost from Koa Rhodes, who rushed for almost 200 yards and three touchdowns, giving the Generals a big spark on their offense. They also received a great game from Christopher Espinoza, who used his downhill running style to bulldoze the Vikings' defense, a great compliment to Rhodes' style of running.

Freshman quarterback Ezekiel added the anchor to the offense, running the ball when needed and passing to his corps of receivers to balance the offense.

A great improvement from last year's squad was the outstanding play of the General defense, depsite a little hiccup at the beginning of the game when Jesus Vasquez nearly had an interception, but tipped the ball to a West receiver to account for the Vikings' only score.

With the exception of that play, the Generals' defense played a flawless game, bottling up the Vikings' runners and keeping the West High quarterback scrambling for the majority of the game.

Coach Gerald Pierucci had earlier saidt this year's squad was going to be a fun one to watch, and he wasn't wrong. This team entertained the Generals' faithful with a performance that was a bright sign of things to come this season. 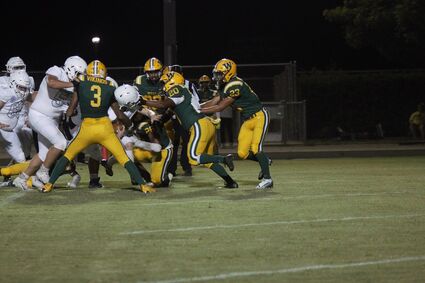 Shafter struck quick on their first possession of the game, with the drive ending with Rhodes scoring from a few yards out for a 7-0 lead. After giving the Vikings their only score of the night on the ensuing possession, the Generals wasted no time in widening their lead. It was 13-6 at the end of the first quarter, with another run from Rhodes from 28 yards out.

In the second half, Rhodes and the Generals' offensive line put on a show, with Rhodes scoring on runs of 55, 1 yard and 34 yards. The Generals' defense got in on the scoring when Jonathan Escobedo took a Vikings' pass out of the air and scrambled the other way for a 66 yard pick-6, making the score 46-6.

With the win, the Shafter Generals will open their South Sequoia League season at Arvin against the Bears. The Bears upset the Generals in the first round of the playoffs last year. The game starts at 7:31 p.m.