Generals stay perfect on the season 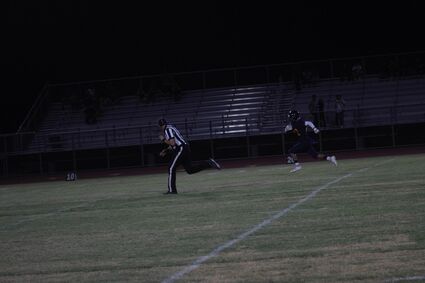 Jesus Vasquez races to the end zone for a touchdown.

The Shafter High Generals beat the Orosi Cardinal on Friday night, keeping them unbeaten on the season. The game was called midway through the third quarter when there was a second delay due to lightning in the area.

The Generals won the game 25-6, with a good performance on offense from running back Christopher Espinoza, quarterback Ezekiel Osborne and receivers Jesse Bernal and Jesus Vasquez. The team was playing without key running back Koa Rhodes, who sat out the contest with a hyper-extended knee, suffered against Mira Monte.

Shafter started the scoring with a 26-yard touchdown pass from Osborne to Vasquez. The Shafter High defense played another stellar game, allowing the Cardinal just one score. In the last two weeks, the Generals' defense has allowed only six points. Their line has been defending the run effectively, with the defensive backs keeping the opposing offense off the field. 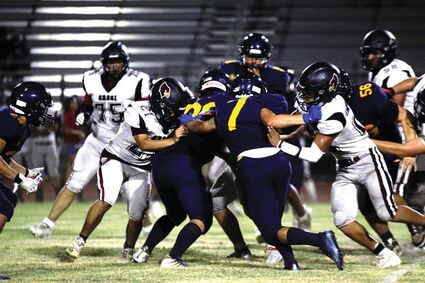 The Generals' defense had an outstanding game.

With a 6-0 lead, Osborne added to the lead with a 12-yard quarterback keeper, putting the Generals up 12-0. Shafter increased their lead when Bernal took a punt 86 yards for a touchdown, giving the Generals a 19-0 lead.

Shafter completed their scoring late in the second quarter when Osborne connected with Vasquez for another touchdown pass, giving them a 25-0 lead.

This was the first game for the Generals in their newly renovated stadium. The new video scoreboard displays a variety of graphics, and has instant replay capabilities. Multicolored LED lights are expected to be added to the lighting system for their next home game, which will be their SSL opener against Chavez High School on Thursday night.

Rhodes will reportedly be suited up for the game, giving the Generals a big boost. The junior varsity game starts at 5 p.m., and the varsity contest starts at 7:30.