After vandalism, church begins to rebuild 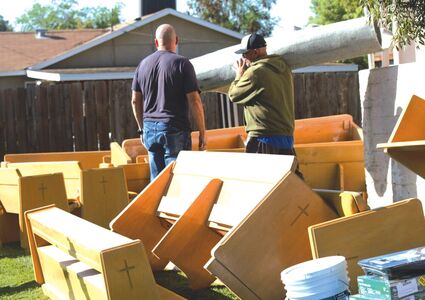 The vandalism caused Rev. Keven Huckaby and the church to get rid of a lot of the furnishings in the church.

Two attacks on their church in the last two months hasn't stopped the Shafter campus of the Ridgeview Community Church from moving forward.

While the Shafter Police Department continued to look for clues in the substantial vandalism of the church's West Lerdo Highway sanctuary on Sept. 28, the church held a clean-up day on Saturday to begin the rebuilding process.

Pastor Keven Huckaby of the Ridgeview Community Church of the Nazarene in Bakersfield, who oversees the church in Shafter, said that he was so touched by the support that the community has shown to the church in this trying time. "This really shows the love that this community has for one another," said Huckaby.

The Shafter Police Department was called at about 6:15 p.m. on Wednesday because of the vandalism. Upon arrival, the officers found broken windows, damaged pews, paint on the windows, and other damage. Huckaby estimated the damage is was in excess of $30,000.

On Saturday, over 75 people from different churches showed up to help them clean out the church and start to repaint to cover the damage. Huckaby said that they also will have to deal with the insurance company in the near future.

Huckaby said that he called the company and they told him that they were happy that he had called because they had been approved on another claim.

Huckaby said that this was regarding an incident two months ago in which a few of their windows were broken, totalling about $10,000 in damage. Huckaby said that he told the company that he was thankful to have that approved but, "We are going to have to start a new claim on some extensive damage to the church."

Workers were busy pulling up the carpet in the church and there was a smile on Huckaby's face. "I was hoping that there was going to be hardwood floors when we take the carpet out. Underneath the carpet were hardwood floors that will be beautiful with a good sanding and waxing. "I guess there is a blessing in this crisis," said Huckaby.

They also were busy dismantling the pews. When asked if they were going to replace the pews, Huckaby said that they were going to put in chairs instead of the pews. "We were contacted by the city recently because there was a group that was in need of a meeting place. We couldn't accommodate them because of the pews. So, instead of replacing the pews, we can put chairs in there and will be able to reconfigurate the building and will be able to let other groups use the sanctuary."

Sarah Merchant, who was a greeter at the church on their clean-up day, said that she was so touched with the outpouring of love and support that the residents have shown. "I just can't believe all of the people who have showed up. This is amazing!," said Merchant.

Among the volunteers were pastors of several churches in Shafter, as well as city servants, including Councilmembers Gilbert Alvarado and Cesar Lopez. 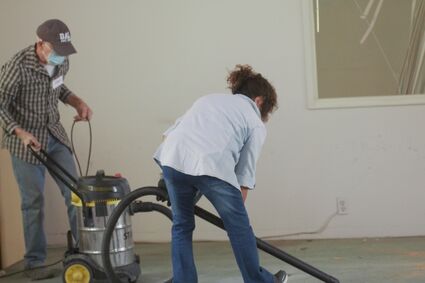 The young and the old were on hand to work on the clean-up.

They were joining the rest of the volunteers who were sweeping, tearing up carpet, breaking up pews, dismantling a piano that had been damaged with paint and carpet glue. Carpet glue had also been poured on the pews, smeared on the windows, and on the carpet.

Huckaby said that the Police Department didn't know how many people were involved in the crime, and didn't have any leads at this time. "But, I did tell the Police Department that when they catch the culprits, I would like to meet with them; not to reprimand or speak in anger, but to let them know that we love them and that we will be praying for them to turn away from this destructive path."

The Shafter police said that the investigation is ongoing and encourage anyone who has any information on the case to contact them at 661-746-8500.