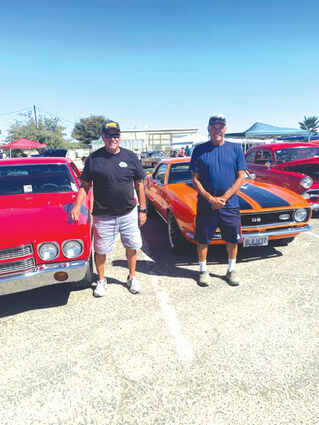 Rick Roeder with Randy Roeder has owned his 1970 Chevy El Camino for 42 years and bought it for $500.

It was a festive occasion with over 62 cars on showcase.

"This is the best car show we have had with the most entries. It was not only the biggest turnout, but we also had the most beautiful cars ever," Leading Knight Jerry Bozarth said.

He added, "It was special because Willard always supported the show and would participate with his car. This year again, his daughter Cindy Banducci brought it."

Banducci said, "I love that the car show is in his memory. He would be so proud. The club put a lot of work into it, and I'm very appreciative."

Exalted Ruler Sergio Garza said, "Today we had a lot of fans and many low riders, and classic cars and pickups. We also had motorcycles and golf carts."

Garza said, "We do this for the community for them to get together and have a good time."

He said the best part was having the support of those who attended.

"Without the community, we can't carry out our mission to help the residents of Wasco," Garza said.

Proceeds from the car show will be used for grants for local students, schools, senior citizens and the recreation and parks district.

There was food, arts & crafts vendors, raffle prizes, a silent auction, a beer garden, a bloody mary bar and music by DJ Boom Dogg and the Dixie Nuts at the event.

"It was built by my mom and my stepdad. It was given to my family when he passed," Adamak said. "I came out last year, had a great experience and wanted to come back."

Randy Roeder said of his 1968 Chevy Camero Super Sport, "I got it three years ago. It was something I wanted as a kid. It's nostalgic to ride around in it, and it takes me back to my teenage years."

Randy's brother, Rick, brought his 1970 Chevy El Camino and had a lot of fond memories of it.

He said, "My wife and I had our first date in this car."

"I think it's unique and different than others. It has hydraulics and a custom paint job with murals," Aguilar said.

The Orange Heart Foundation organized the cornhole tournament. They have been doing this since 2015.

The winners were Sergio Garza and Daniel Winery.

Orquidea Ocampo of the OHF said, "We do this to promote the Elks and OHF and our future events. We are always in partnership with them."

It was an opportunity to catch up with old friends.

With his 2001 Corvette convertible, Brad Bell said, "I'm an old Wasconian. This is a way to show my pride in the city. It's not only a car show; it's a reunion. That's why we come out here."

Tony Romero said, "I loved it. I've been a few different times, and it is always awesome. I'm local and like catching up with a lot of my buddies from here."

Firefighters from Kern County Station 31A served as the judges. 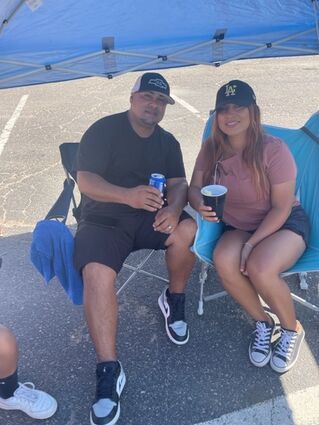 Tony Macias, with his wife Lupe, said he was impressed with all of the nice cars.

Sinjin Lloyd said, "There were a ton of great cars, and it was hard. We were looking for how clean they were, the craftsmanship of the vehicle and how much time and effort they put into it."

Many trophies were awarded, and Mike Torigiani took home the title of best in show with his 1956 Ford F100.

"I feel very privileged. Competition was tough. It's my first time winning a trophy this big. I had a great time at the car show," Torigiani said.

Bozarth said the event was a success.

"I look forward to next year as we continue to grow year after year and put on this car show as a tribute to our beloved Elks brother, Blaine Willard," Bozarth said.