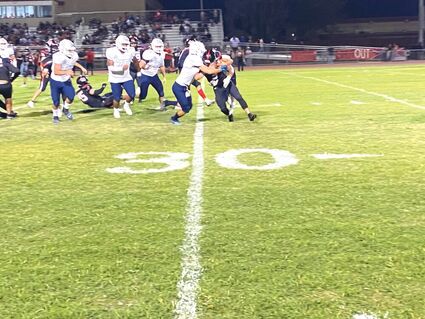 The Generals' defense didn't let the Cougars into the red zone for the entire game.

The Shafter Generals got their first SSL win of the season with a 43-0 thrashing of the McFarland Cougars on the road Friday night.

The Generals didn't waste any time scoring, as they got a touchdown on their first possession of the game when Koa Rhodes ran the ball in from 12 yards out, giving the Generals a 7-0 lead.

The Shafter defense had one of their best outings of the year with the shutout of the Cougars. They also even got involved in the scoring when Jesus Vasquez grabbed an interception and ran it in from 45 yards out, giving the Generals a 20-0 lead. 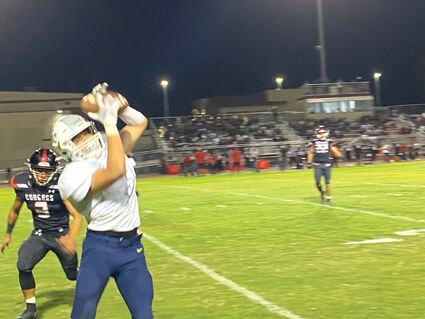 Jesus Figueroa grabs a pass for a big first down.

The Shafter defense also accounted for two more points of the scoring when the line pressured the Cougar offense into a mistake and got a safety, making the score 29-0. Rhodes had another great game, accounting for three of the Generals' scores on offense. He had a highlight-reel worthy touchdown when he took a short pass from freshman quarterback Ezekiel Osborne and ran for 83 yards and a touchdown.

The game was played with a running clock in the second half. That still didn't stop the Generals from getting their scores, with Osborne connecting with Vasquez on a touchdown pass to widen the lead to 43-0.

The Shafter High junior varsity squad had just as much success on Friday night, beating the Cougars by a score of 38-7. The Shafter offense was solid with a balanced attack and the defense stifled the Cougar offense all night.

Shafter will attempt to keep the momentum going when they play the Delano Tigers in Delano. The junior varsity game begins at 5 p.m. Friday night, and the varsity will kick off at 7:30 p.m.