Mosquito season not quite over yet 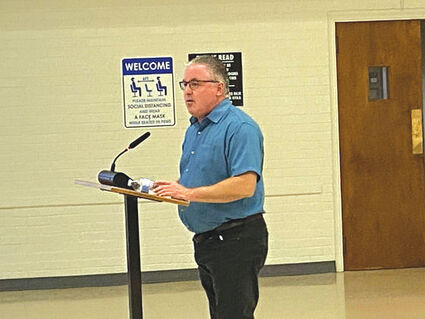 Terry Knight is the public information officer for the Kern Mosquito Vector Control.

The Kern Mosquito Vector Control held a media event recently and stated that the end of mosquito season is not quite here yet, with the cooling trend keeping the populations up, according to our Terry Knight, public information officer for Kern Mosquito Vector Control. "We still need to keep our guard up against these pests, but the season is expected to end around the end of October."

Kern County has used a new weapon this year in its fight against the pests, especially the newest mosquito on the radar, the Aedes Aegypti, or ankle biter species of mosquito. This pest reared its head a few years ago and has been wreaking havoc since then. The mosquito does not carry the West Nile Virus, but it is very aggressive and bites multiple times, with a painful bite. "This mosquito is a lot more aggressive than the other species in the area and can survive in a very small space, even in a bottle cap full of water, in which thousands of eggs can be laid."

Beginning in June, the district tried out the new weapon in limited areas in Bakersfield. Using a truck-mounted, gasoline-powered mist blower that generated a plume of water mist and mosquito larvicide over the front and back yards of homes in residential neighborhoods, operators hoped to be able to cover a swath of about 300 feet.

The motorized atomizer mixes water with a product called VectoBac WDG, which contains Bacillus thuringiensis israelensis, or Bti, a naturally occurring soil bacteria whose toxicity is limited to mosquitoes and related flies, according to the district.

Bti has no toxicity to people and pets, Knight said, and is certified for the treatment of organic crops.

The process is known as Wide Area Larvicide Spray treatment.

The district chose three 1-square-mile zones, in southwest, northwest and northeast Bakersfield to spray repeatedly over the next several weeks. The study also included a control zone to monitor mosquito levels in an area untouched by the spray.

Some residents were understandably unsettled by the effort to spray over their property. Other area residents who had suffered awful bites and effects from the mosquitoes begged to be added to the spray area.

Beginning in early June, one zone received six weekly applications and the other two zones only five due to equipment failure.

Knight said that the best defense against this pest is to eliminate sources of standing water, such as water left in plant containers, small pools, drainage vents by water sources. He advises people with potted plants to make sure to scrub the bottoms and trays underneath the pots with a mixture of bleach to kill the eggs.

In the Shafter and Wasco area, the amount of service calls has increased by 10 times in the in the past three years, with the invasion of the ankle-biter species being the main culprit. For questions and to report on a problem in your area with mosquitoes, contact Vector Control at 661-589-2744.