Tigers put up a fight against Chavez 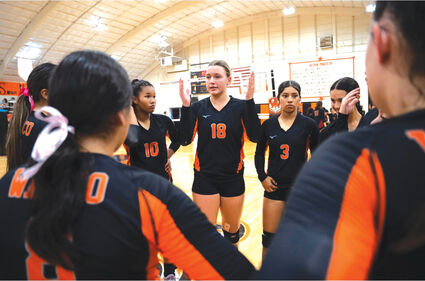 Team Captain Sarah Cobb, a senior, tries to encourage her team while down 2-1 sets against CCHS.

The Wasco High School girl's varsity volleyball team went head-to-head against Delano's Cesar Chavez High School. It was an exciting game, but in the end, they lost, 3-1.

A spirited crowd rooted for the girls with chants and cheers. For the seniors, it was their last home game, and emotions ran high.

Makenna Gebhardt said that the Tigers gave it their all, and thinks that is what counts.

"They fought until the end, and they made Cesar Chavez work for the win this time," Mia Hernandez said.

The game was full of energy, and the girls brought their passion and love to the sport.

"I loved the game. It was a great matchup. I'm happy with the way they played," Elizabeth Habshire said.

Angelina Cortez enjoyed the game. "The best part was the rallies back and forth," she said.

It was a fierce battle between two talented teams.

Araceli Fuentes said the Tigers didn't give up, and both teams put in a strong effort all the way around.

"I think Wasco tried their hardest, but it was an off game for them," Xavier Iniguez said.

Left hitter Daisy Razo said they pushed hard, but it was not hard enough.

"I learned that you don't have to get in your head if you make a mistake. You have to clear your mind and move on to the next challenge," Razo said.

She added, "Some of our players had some great hits."

"I think we could have played better, but we weren't at our best," she said. "Chavez won our league around three times. They were a tough team to play."

'It was our best competition ever though we still could have won. It was my senior night, and I tried to have fun."

She said you should never give up. 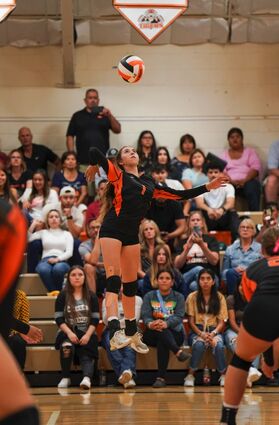 Daisy Razo, a freshman, goes in for the spike.

"You always have a chance," Hazelton said. "I'm looking forward to our next game. I hope to play like tonight but have better execution and play like a team instead of an individual."

"We did a good job playing together. We definitely improved since the last time we played them. The best part is being out there with the girls. This team is really close; it's a family. Any day I get to spend with the girls is a good day."

The team has big goals.

"We have our mind set on the playoffs. We have three more games, and it's looking like we'll go to the playoffs," Cobb said. "Today, I learned that it really takes commitment. Everything you do in life takes hard work; it's just a matter of who is willing to dedicate themselves."