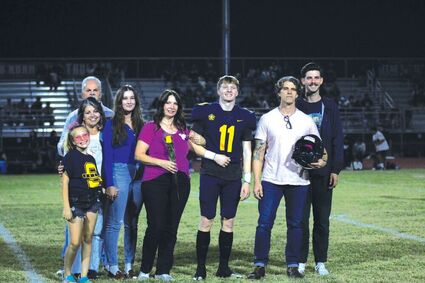 Koa Rhodes was one of the seniors to be honored on Senior Night.

The Shafter Generals lost to the Thunderbirds of Kennedy High on Senior Night, 29-14.

With a team that does not boast a lot of seniors this year, the lack of older players showed on Friday night, as the team suffered several mental breakdowns and were manhandled at the line of scrimmage for the majority of the game.

Kennedy took a 7-0 lead after a drive that ended with a touchdown pass, after the Generals' defense had forced the Thunderbirds into a 3rd and long situation. This would be a repeating theme for the night, with Shafter forcing the Thunderbirds into long third down situations, only to give up a big pass play, allowing Kennedy to keep their drives going.

On the other end of the ball, immaturity of the Shafter High offense showed this night, with penalties on key downs, as well as missed blocking assignments to allow the Thunderbirds to control the line of scrimmage, not being able to get the Shafter running backs into the Kennedy backfield.

Shafter did manage to answer back before the half, scoring on a long pass play from freshman quarterback Ezekiel Osborne to Jesus Figueroa, covering 65 yards.

With the momentum starting to swing to the Shafter side, a lot of wind was taken out of their sails when they gave up another long pass play just before halftime, widening the lead to 14 points again. 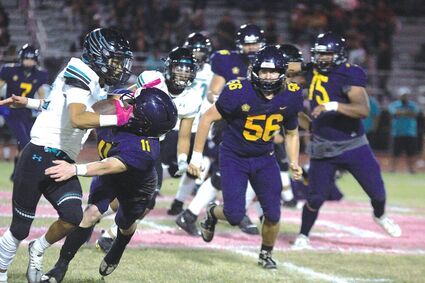 The Generals' defense tackle a T-Bird back for a loss.

In the second half, the Generals attempted to close the gap, but every time they mounted a drive, there would be a penalty that killed the drive, or a mistake on the ground game, not being able to get the first down.

The Thunderbirds closed out the scoring late in the third quarter when Shafter was backed up into their own red zone. An errant snap sent the ball into the endzone, resulting in a safety, giving Kennedy a 29-14 lead.

Shafter will try to even their South Sequoia League record at 3-3 and prepare for a possible playoff run when they face off against Wasco, at Wasco on Friday night. This rivalry began back in 1933 and is always the highlight of each team's season. The junior varsity game begins at 5 p.m., with the varsity kicking off at 7:30 p.m.