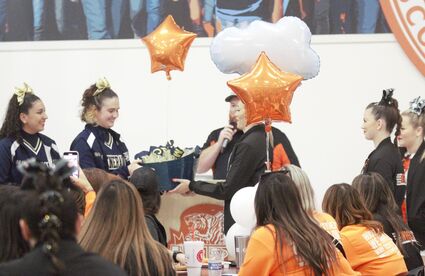 For the 90th time, the Shafter Generals and the Wasco Tigers faced off in one of the fiercest and longest-standing rivalries in the state. As is the custom, on the Friday of the game, the host school – this year it was Wasco – hosts the two schools' football players, coaches, cheerleaders and Associated Student Body leaders to an exchange breakfast. During the breakfast, the cheerleaders exchange gifts with the opposing side.

After the breakfast, it was time for the Exchange Rally. The Wasco High auditorium is one of the loudest venues in any high school anywhere. With its resonating acoustics, the cheers and chants reverberated around the building. Both cheer squads performed, along with Tilly the Tiger, who put on a great show.

Of course, it wouldn't be an exchange rally without the customary video produced by each school. The majority of the time it is a series of skits spoofing the other school's and team's students, players and staff. 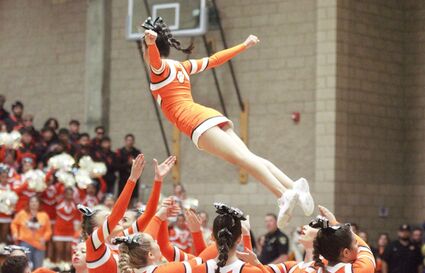 Proving Tigers can fly, the Wasco cheerleaders perform a routine.

At the end of the rally, each head football coach announces their players, who in turn, meet at the middle of the stage to shake hands. This always gets a big cheer from the students and a lot of competitive chanting. After the rally was over, the visiting school returned home to await the exchange rally on their campus. This year, it was in the Shafter High gymnasium. Both cheer squads performed their routines for the Shafter crowd, and the Generals threw in a dance by some of their faculty. It was then time for the video, which was "outstanding," according to several Generals and even one Tiger.

The rivalry week culminated with a battle on the gridiron between the Generals and Tigers. For the first time in the rivalry, the game was tied at regulation and had to go to overtime. The Tigers won the game, thus earning bragging rights for the next year, until the Blue and Gold and Orange and Black do battle again.