Wasco carries on the tradition 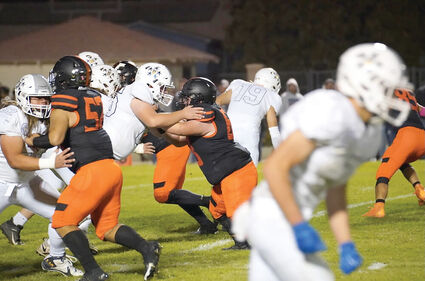 After a tough battle, Wasco High School junior and varsity football teams took home the win against Shafter High School. This marked one of the biggest rivalries in Kern County.

It was a spirited week for WHS students, with many activities leading up to the games.

The fun started on Monday when students enjoyed dress-up days and lunchtime fun with food and karaoke during the week.

A friendly bonfire on the WHS football field took place on Thursday night. The community and students, including football players and cheerleaders, came together to show their pride with loud cheers as a paper mache Shafter High General mascot was set on fire.

Some said it was great preparation for the big games.

"It was my first time, and I was really looking forward to it. I brought my Tiger spirit. I always do," Lilliana Martinez said.

Josh Huddleston, athletic/activities director, said, "It was well attended, more than previous years. It's a tradition we brought back from Covid."

He added, "This is for the kids, a warm-up for the exchange rally."

Ahead of the game, on Friday morning, a breakfast was held in the cafeteria for WHS football players, cheerleaders, coaches, ASB officers and school administrators, where they broke bread before the exchange rallies. Shafter students also attended, including their football players and coaches.

Since it was a home game, WHS hosted the breakfast.

After, one of two exchange rally's kicked off inside the auditorium for the WHS student body. The Shafter football players and cheerleaders participated.

It was a festive celebration to get the students pumped up before the games. The cheerleaders performed, and the football players were introduced. Percy, the mascot, also danced a special routine on stage.

"It was very fun and a good time. We really got into the Tiger spirit," Fernando Rodriguez said.

A video screened of a skit students filmed was also a crowd favorite. The energy was incredible as everyone chanted fight songs and cheered for the football players with much excitement.

"The boys are going to do a great job, and I'm glad this legacy carries on," Andrew Davila said.

After, Wasco students headed to Shafter High for their rally, where they were warmly welcomed. Both of the school's cheerleading teams danced, demonstrating their expert skills with elaborate stunts. Each of the team's football players were presented to the spectators.

The junior varsity football game started the night off of the competition. They played hard and, in the end, came out on top with an 18 to 13 win.

"It was super exciting because our town has a unique rivalry. I think it's awesome to see our spirit alive," Madison Wedel said.

She added, "We get that small-time feel that other places don't get to experience, and the boys always show up at a different level, showing their true heart."

Annette Gomez came to support the WHS football players and the cheerleaders.

"You get to see all of their efforts to prepare for today. It's a tradition for a very long time, and it's great that people go full out with their pride."

Junior varsity head coach Jose Robledo said of the game, "It was tough. Shafter brought it to us, but we went away with the win. The best part was winning; especially anytime you can beat Shafter."

Player Esteban Soto scored a touchdown. He said, "I think we did pretty good. We couldn't move the ball until the middle of the game."

Soto continued, "We appreciate the people who came out tonight and supported us throughout the season. It was our last game of the season, and we finished strong."

The varsity football game was a nail-biter where it went into overtime for the first time in 90 years against Shafter. After the fourth quarter, the teams were tied 35 to 35.

In overtime, WHS scored a touchdown to bring home the title of champions, earning bragging rights with a score of 41 to 35.

"It was a really intense game, and the boys played well," Hector Poggio said.

Kayle Perez said, "I was so happy they won because it is a great game to see every year."

Varsity coach Joe Dominguez added that the boys faced a lot of adversity and challenges. 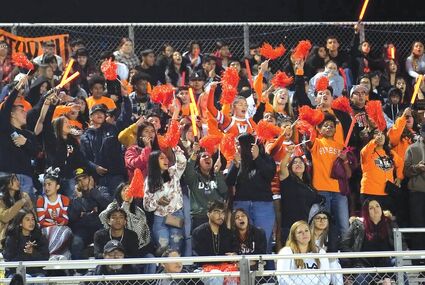 WHS fans cheered the players on.

"Ultimately, they put the game in their hands and really shined."

Player Farmer Moreno said, "We are going to remember this for the rest of our lives."

Another player, Michael Dominguez, shared, "I think we were all focused. Words can't describe my emotions. This feeling is unreal. The best part was the overtime touchdown that sealed the game."

The varsity boys will move on to the first rounds of playoffs for the Valley championship with their first game on Friday at 7 pm against North Bakersfield. It is a home game and promises to be another spirited fight for the win.