Residents exercise their right to vote 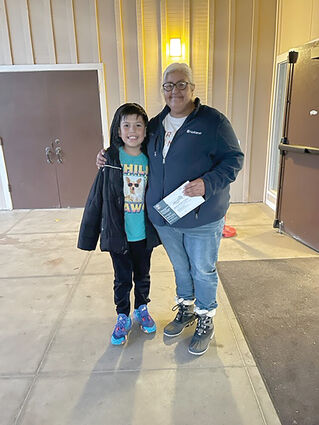 Daniel Ramirez with his grandmother Julia Tijerina who brought him to instill in him the value of voting.

It was a busy day of voting on election day. Poll workers in Wasco reported a busy flow of voters throughout the day, with an even bigger stream of people that came to drop off their mail-in ballots.

Many expressed that they voted for numerous reasons, mainly sharing that they thought it was their duty to do so as Americans.

Jacky Moreno said it was her second time voting. "I was motivated to vote because of Proposition 1, which would affect women's reproductive rights. I know people it would affect."

She dropped off her ballot.

"It was just a lot easier," she said.

"It's important to me to have representation that supports my values. Those that don't vote are not as informed. I encourage others to think about the younger people and our future.

Chris Shaw said the voting process was fast and easy.

"I voted for everyone that was a republican. Locally, I voted for Cheryl Wegman and Joe Hively.

Ian Hunter voted for the conservative republican party. As an immigrant, he said it was exciting to vote and have a say in the elections.

Aurelio Juarez said he needed to support his party and voted republican.

"So far, our democratic president hasn't been doing a good job over the last two years. The main issue I care about is the economy. Everything is being up charged to the point where we can't afford to buy things."

Diana Guerrero mirrored this. She has been voting since she was 18 and thinks it is her civic duty.

"I leaned more on the conservative side because things are not going so great right now. I would say to people to motivate them to vote is that if you don't like the way things are and you want change, the only way to change them is to vote."

She, too, cared about the economy.

"I feel like everything is getting so expensive, and with California being so liberal, they spend a lot of money, and I think it's not necessary. They tax us too much," Guerrero said.

Nati Dominguez voted to have a better future for our children.

"I voted for Rudy Salas because I see he has been doing good. There were a lot of negative commercials about him, but I didn't believe them," Dominguez said.

"I have high hopes he will do good for our people and community. We need help."

Dominguez voted to have her voice heard.

"So there will be a change for the better and taking in mind the best for our nation."

Consuelo Puga said, "I clearly voted democratic because I feel they lean more towards changes. I feel they are more truthful."

She added, "I voted for Rudy Salas because he is one of us, and he has done much to advocate for the underserved."

Lucia Ponce said she participated in the voting process so we could have better luck with different leadership.

"I voted for Gavin Newson because he is doing a good job in California. I voted democrat on almost all the issues."

Ponce said the issues she cared about were water, employment and the cost of gas.

"All of the prices for things are going up, and salaries are not in line with the current state of the economy."

Kern County firefighter Johnny Irwin dropped off his ballot and said he voted because it is one of our rights as U.S. citizens.

He shared that he cared about Measure K, which is about a half of a cent tax for county residents to go toward firefighters and law enforcement.

"Because we have low staffing, this would assist with financial issues for outlying areas. I'm hoping for a different governor because I am a republican, and I don't think he is doing a very good job," Irwin said.

Tilo Cortez said that he voted so his voice could be heard and that it is critically important that everyone participate.

"It is something that has been ingrained in me. With all the things going on in the world, this is our way to affect change."

He said he cared about reproductive rights and that local races were essential to our community.

"I hope everyone comes out to vote whether we agree or not agree. Our voices need to be heard."

"The voting we are doing now is for their future, and we have to teach them to vote. I was blessed to have him come with me."

Tijerina said voting is part of life and learning.

"I care about senior citizens and people that need dialysis and medication. I am not a senior citizen, but if I don't do something now, it might affect me."

She continued, "I voted for all of the democrats because I feel they are the ones fighting more for us. I am not really into politics, but when they start affecting communities like the elderly and babies that are not even born yet, it worries me."

Jasmine Quintana is an educator. She said, "I work in education, and I want to advocate for the best for the benefit of students.

Diego Sandoval voted mostly democrat and likes being part of the voting process regarding local elections.

"I voted mostly democrat because I know more about that party versus the republican party," Sandoval said.

Cindy Villasana said that she always votes and thinks that it is vital that everyone makes decisions based on their beliefs.

"I think as American citizens, it is our job to vote."

She said that ultimately our votes put into place policies and laws that we will have today and for the future. 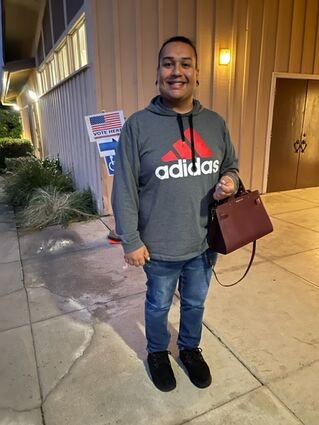 Jose Rodriguez said with voting he feels like his opinion matters.

Villasana voted democrat because she agreed with the party's views.

"I voted for Rudy Salas because he is for farmworker rights. I feel like he is the person to really affect change and make a difference for farm laborers," Villasana said.

Villasana said it was important to vote and do her part.

"I voted democrat because I have always been more liberal with my thinking, and I share more of my beliefs with that party."

At the time of this article, it was too early to report on official results.