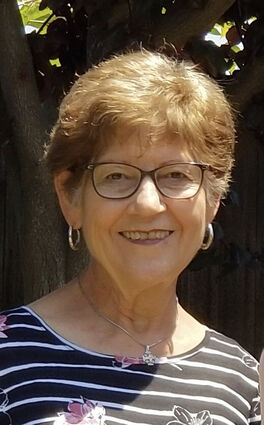 Shirley Funk was born Feb. 19, 1939, in Meade, Kan., to Martin and Katherine (Rempel) Classen. She was the oldest of five children. Shirley went to be with the Lord on Nov. 10, 2022. In her childhood, the family moved to Omaha, Neb., in 1945. The family then moved to Burns, Kan., for a few years before making the move to Wolf Point, Mon., in 1953. In Wolf Point, she met her future husband, Larry Funk. Shirley moved with her family to Dallas, Ore., for a year before marrying Larry. They were married June 14, 1957, and the young couple moved to the Wasco-Shafter area for the remainder of their lives.

Shirley worked for Maple Leaf before a 50-year career in bookkeeping. While living in Wasco, she was a charter member of the Wasco Mennonite Brethren Church. Moving to Shafter in 1991, they joined the Shafter Mennonite Brethren Church. Shirley was active in many roles in the church, as a deacon and in the Women's Ministry. After Larry passed away in 2008, she began leading Grief Share groups in her home. She remained active in many social events and loved to travel visiting family and new places. But her home and family always remained a passion, as evidenced by her fondness for entertaining and her love of gardening.

Shirley had two children, Kendall and Cheryl. She is survived by Kendall Funk and wife Lori of Bakersfield, and Cheryl (Funk) Miller and her husband Seth of Boring, Ore.; grandchildren James Funk and wife Amanda (great-grandchildren Hailey and Caleb Funk), Elizabeth Funk, Nathan Miller and wife Barbara, and Eli Miller. She is also survived by brothers Jim Classen of Des Moines, Iowa; Allan Classen of Portland, Ore.; and sister Gerrie Bliven of Dallas, Ore.; and numerous other relatives and many dear friends. She was preceded in death by her husband, Larry, and by her brother Virgil Classen.

Shirley was known as a fun-loving, active social person. In lieu of flowers, donations can be made to North Kern Christian School, 710 Peters St., Wasco 93280. A graveside service will be held Friday, Nov. 18, at 2 p.m. at Shafter Memorial Park, followed by a memorial service at 3 p.m. at Shafter Mennonite Brethren Church. Pastor Pat Coyle will officiate the services. Visitation will be held Thursday, Nov. 17, from 4 to 8 p.m. at Peters Funeral Home.